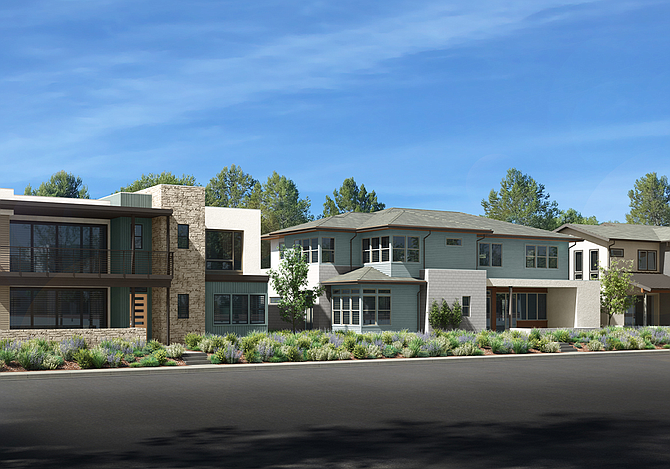 Rendering of Atlas home, to deliver 2021

Irvine-based FivePoint Holdings LLC (NYSE: FPH) is helping to finance the construction and selling of a collection of high-end new homes planned for its latest community at the Great Park Neighborhoods.

The master-planned developer, which typically sells plots of land to individual homebuilders for them to build on, has entered into a fee building arrangement with Aliso Viejo’s New Home Co. (NYSE: NWHM) for a 38-unit collection of single-family homes at its Rise community, a 700-home development in Irvine which opened earlier this year.

The collection of homes, called Atlas, will be the 10th and final neighborhood to open at Rise, with prices starting around $1.5 million.

New Home said it expects to deliver the homes by the start of 2021.

Future fee building arrangements are possible for the Great Park Neighborhoods and other FivePoint-led projects in California, executives with the master-planned developer said.

It’s a change in tactics for FivePoint, which historically has designed the homes for its communities, but left the building and marketing to its builder partners once the land is sold. Like other large area master-planned developers such as Irvine Co. and Rancho Mission Viejo LLC, it shares in the profits of any home sales with the builders if certain thresholds are met.

In the new fee building partnership, FivePoint will maintain a larger stake in the land, and fund the entire cost of the Atlas project with New Home getting a fee.

The higher-than-typical home prices for Atlas, as well as rising costs for land, in part prompted FivePoint to explore the fee building opportunity, according to Chief Executive Emile Haddad.

“When we brought these lots to the market, some of the builders were concerned about the price point,” Haddad told the Business Journal.

“Fee building is a way for us to make sure we don’t discount land that we feel is irreplaceable.”

FivePoint is roughly 60% through the selling of home lots at Irvine’s Great Park Neighborhoods, the 2,100-acre master-planned development that’s entitled for some 10,500 homes. More than 4,200 homes have been built to date.

The use of fee building is also the result of a shrinking pool of homebuilders, an industry that’s seen a fair amount of consolidation in the past decade.

“When we started building at the Great Park in 2013, we sent out packages to 22 different builders,” Haddad said.

“Now, that universe is a much smaller one, and as a result, it’s more challenging to find builders to buy land.”

Area builders that have built at the development over the years include Irvine’s CalAtlantic, the successor to Standard Pacific Homes which was bought by Lennar in 2018, and Newport Beach’s William Lyon Homes, acquired earlier this year by Taylor Morrison Home Corp.

For the new program, Haddad approached fellow homebuilding veteran, and friend, Larry Webb, who stepped down as CEO of New Home in 2009 last year, but has maintained close tabs as executive chairman.

“We feel very comfortable with having Larry run the homebuilding program for us,” Haddad said.

New Home has extensive experience as a fee builder in Orange County, having long served in a similar manner for Irvine Co. with its in-house homebuilder, Irvine Pacific.

New Home earned 25% of its revenue from its Irvine Pacific arrangement in 2017; that figure fell to 14% in 2019 as sales on the Irvine Ranch slowed, according to the builder’s latest annual report.

The builder’s been looking to grow its base of fee building customers, Webb said.

“We are currently looking at other ways to potentially expand our fee building operations through similar arrangements with other large regional master plan developers, single-family rental companies and private landowners,” he told analysts in late July.

“We are fortunate to have the financial capabilities to explore this new option, and we expect to do more with New Home here and in other communities, as well as with other builders if they are the right fit,” Haddad said.

There are differences between the Irvine Pacific and FivePoint fee building arrangements.

For starters, the Great Park Neighborhoods homes will be sold under the New Home Co. name. And whereas Irvine Pacific homes are often among the lower-priced offerings it has at Irvine Co. communities; Atlas will be among the pricier homes at Rise.

The homes are on lots that are larger than average, and more wide than they are deep, Haddad said.

The homes, sized between 3,360 and 3,647 square feet with up to five bedrooms, will be “ideal for move-up buyers, especially those looking to take advantage of low interest rates,” according to marketing materials for Rise.

Webb notes that this venture differs than that of the one with Irvine Pacific, where New Home essentially acted as a general contractor.

With FivePoint, New Home will handle the homebuilding, marketing and selling process, and will also keep liability throughout the home’s 10-year warranty.

“Our fee business is what we do well. It’s a steady, low-risk source of business where we put in sweat equity while reducing overhead, and putting money back into the company,” Webb told the Business Journal. “It helps us to become a larger homebuilder in Orange County.”

It also marks an opportunity for New Home to get back into the development of pricier home types, a product that the company once specialized in, but has backed off of in recent years as homebuyers look for more affordable options.

“Also, we had seen a trend that the very best [local] lots were built out,” said Webb, whose firm currently doesn’t have any wholly owned projects in Irvine, among the state’s fastest-growing cities the past decade.

A few years ago, it was one of the larger builders in Irvine; its first big project was the Lambert Ranch development in the city.

Over lunch, Haddad presented Webb with the opportunity to expand New Home’s presence in the city, where Webb has noticed increasing demand.

“He asked me that if he had good lots, would I want to build on them, and would I want to work with him to do so,” Webb recalls. “I thought it was a good plan; I believe in him, and the Great Park where the planning has been amazing. So, really, it was a no-brainer.”

For Webb and Haddad, this is just the first step to additional fee building projects.

“This is just a baby step, but if and when it works, I’m hoping to do a lot more of this type of work with them,” Webb said.