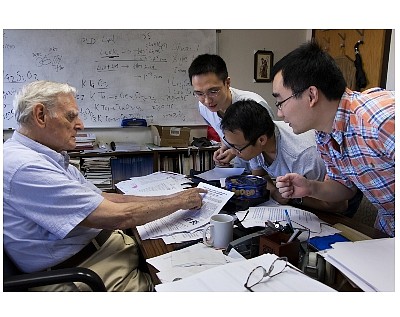 John Goodenough, a member of Irvine-based Enevate’s technology advisory board, has shared in the Nobel Prize in chemistry with two other scientists for the development of lithium-ion batteries.

At age 97, he is the oldest person to win a Nobel award.

Enevate works with lithium-ion batteries and is developing technology to recharge batteries for electric vehicles in a matter of minutes, and Goodenough is considered one of the chief innovators of li-ion battery technology.

After the award was announced in Stockholm Wednesday, Enevate CTO Ben Park said in a statement addressed to the winners that “it's not just battery industry people like me that can feel the impact” of their work.

“Anybody today can open their eyes and can spot at least one device with a lithium ion battery wherever they are in the world. Your contributions have made a lasting impact and continue to accelerate humanity's capabilities.” Park said.

Goodenough joined the Enevate Technical Advisory Board in 2010. The other two winners of the Nobel Prize in Chemistry were Akira Yoshino and M. Stanley Whittingham.