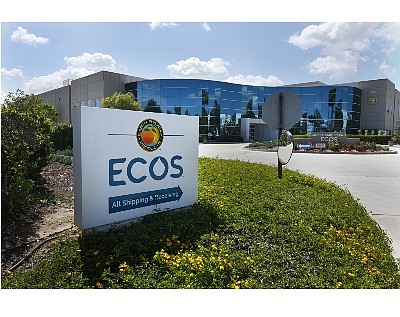 The Cypress-based manufacturer of plant-based cleaning products, known as ECOS, had double-digit sales growth for its products the past few years—outpacing the traditional and green cleaning products category—while expanding its retail presence to an additional 3,300 stores last year.

“When I was calling on retailers in the early 2000s, people were like, ‘Oh, what are green cleaners?’ and really not interested in bringing it in [the store],” Vlahakis-Hanks said. “Times have changed so much.”

The ECOS line of over 200 products—from dish soap, treeless paper towels, window cleaners and furniture polish—are carried in more than 81,000 stores in 60 countries through major retailers including Walmart, Whole Foods, Target, Costco and supermarket chains such as Vons, Ralphs and Anaheim-based Northgate Market.

Last month, it expanded its partnership with Walt Disney Co. to introduce a line of pet products, in addition to its baby-safe Disney ECOS line. Later this year, the company will introduce an EPA-certified disinfectant to serve commercial accounts like hospitals, with waterless products and packaging that utilizes about 60% less plastic.

A 2018 survey from Nielsen found “younger shoppers are more than twice as likely to make choices based on environmental impact” and are willing to spend more than baby boomers on organic or natural products.

That’s something Vlahakis-Hanks has already witnessed, pointing to sales of its laundry category which grew 17% last year, while the overall U.S. green laundry market saw sales rise 15% and traditional laundry climb by 2%. She added that sales of its dish soap and all-purpose cleaner increased 10% and 21%, respectively, while both categories reported a 3% growth in 2018.

Specific sales figures haven’t been disclosed by the company, which operates out of a nearly 125,000-square-foot facility near the intersection of Katella Avenue and Valley View Street.

Vlahakis-Hanks’ father, Van Vlahakis, founded Earth Friendly in Illinois in 1967. The Crete native immigrated to the U.S. in the 1950s, earning a bachelor’s degree in chemistry from Roosevelt University in Chicago. He spent nearly 10 years in the janitorial services industry, and after seeing firsthand the need for safer and more effective cleaning products, he launched his own firm using ingredients from nature like citrus plants.

He then moved the business to Orange County in 1977.

Vlahakis-Hanks joined the family business in 2003 as its first public relations director. By then, the University of California-Los Angeles graduate had already worked at a lobbying firm in Washington D.C. and then as a public relations manager at a fashion company.

She moved up the ranks at Earth Friendly, becoming executive vice president. When her father unexpectedly died in 2014, she was promoted to president and chief executive.

“It was one of the most challenging moments of my life,” she said, recalling how they were in New York for business two days before he died. “He had [flown] on to Florida and I talked to him twice on Friday, three times on Saturday and the last call he was having dinner with friends and had gone snorkeling. So to get a call that night—I jumped on a plane and before I got there he passed away.”

Grieving, but still needing to run the business was difficult. She was motivated by remembering her father’s commitment to the company.

“I’ll never forget, one of my general managers said, ‘Should we close on Monday and not ship?’ and I thought, ‘Oh my God, my father would be so upset if we didn’t ship,’” she said.

Vlahakis-Hanks was named a Business Journal’s Women in Business award winner in 2016.

At the time of that award, the Business Journal estimated the company’s revenue at more than $120 million.

Vlahakis-Hanks was tightlipped about the company’s finances but said sales have grown at a solid clip since then.

It has 300 employees across four manufacturing facilities in the U.S., including a local workforce of 90 at its Cypress plant.

Earth Friendly has been aggressively reducing its environmental impact over the years and practicing transparency with consumers.

Ingredients and packaging are locally sourced and it works with suppliers to ensure items are recyclable.

Vlahakis-Hanks said it’s the only company in the world to be carbon neutral, water neutral and zero waste, meaning more than 95% of its waste is diverted from landfills. Over the course of eight years, Earth Friendly reduced its waste from 20 trash bins at its former 40,000-square-foot facility in Garden Grove, down to one trash bin by 2017 at its current plant.

Employees are also incentivized to “go green,” receiving a $2,500 bonus if they purchase a green vehicle, $2,000 if they add solar panels to their home or $1,000 for moving within a 10-mile radius of its facility.

Vlahakis-Hanks said the popularity of green and organic products in nearly every sector like beauty and food has helped create brand awareness, but now large conglomerates have been looking to cash in whether through acquisitions or launching a private label brand.

“We’re not a company that has a portfolio of [traditional] products and we’re taking advantage of a green trend,” Vlahakis-Hanks said. “We only do this. Our entire portfolio is green.”