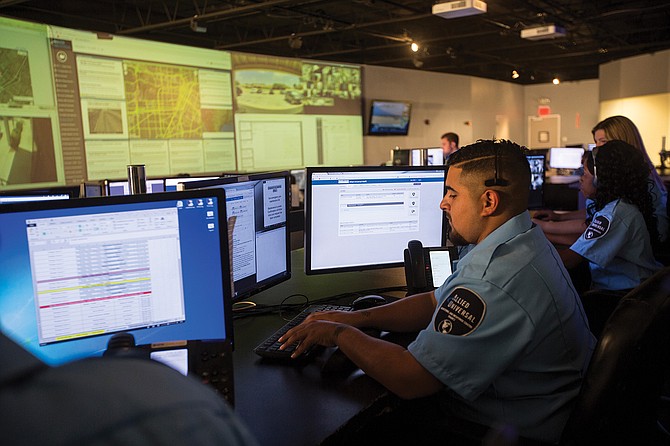 Allied Universal made a $1 billion buy in July to bring its employment to 210,000.

The Santa Ana-based company is considering going public, perhaps as soon as next year, according to Allied Universal Chief Executive Steve Jones.

He said the company is valued at $7 billion to $7.5 billion, which would make it the fifth-largest publicly traded company based in Orange County.

“The fact that Drew took a company public in such a swift manner” was impressive, Jones told the Business Journal last week. “On the technology side, someone like Drew brings a strategic advantage to us.”

Why would Vollero jump from the high-margin tech world to a low-margin, labor-intensive industry that’s less valued on Wall Street?

“Allied Universal is a terrific story,” Vollero said. “The growth is special. The business has done very well. It’s an opportunity to get in here and work with a talented management team.”

Vollero earned a bachelor’s degree in math and economics with high honors from Yale University and a master’s in management from the University of Oxford.

He’s well-versed on Orange County, having served as controller at Irvine-based Taco Bell, and now lives in Laguna Niguel.

The 52 year old also knows Wall Street’s language, having served for 10 years as chief of investor relations at Mattel Inc. (Nasdaq: MAT), where he was also a division chief financial officer.

Eighteen months after joining, he helped take the company public in March 2017. The IPO was a huge hit on Wall Street as shares soared 61% on its first two days of trading, pushing its market value past $30 billion.

Though revenue doubled last year to $824.9 million, the Venice-based company’s luster faded due to slower-than-anticipated growth and its infamous battles with Facebook Inc.

While Snap’s shares have fallen about two-thirds from its IPO price, the company still has an $8.4 billion market cap.

Vollero replaced Bill Torzolini, who served 17 years in the role and will stay on as a consultant until retiring next year.

Jones has taken a company that generated $12 million in annual sales when he joined in 1996 and grown it through a combination of organic sales and acquisitions.

The company’s projected $7 billion in 2019 revenue puts it on pace to compete with Golden State Foods Corp. and Kingston Technology Co. for the second-largest firm by sales headquartered in Orange County. Pacific Life Insurance Co. took the top spot on the Business Journal’s most recent annual private companies list, reporting $9.4 billion in 2017 sales.

With 210,000 employees, if Allied Universal were an army, it would trail Taiwan’s, which has the world’s 22nd-largest army.

Its employment puts it just ahead of Bank of America Corp.’s 209,000, which ranks 26th among the Fortune 500 list of the country’s biggest companies by staff.

It’s the valuation that will be the most intriguing if the company goes public.

The U.S. Security Associates deal reflected a price-to-sales ratio of about 0.7, which if used for Allied Universal, would indicate a value of nearly $5 billion.

There are no publicly traded companies of pure security guard providers on Wall Street, according to David Bahnsen, owner of Newport Beach wealth manager the Bahnsen Group, which has $1.5 billion in assets under management. Wall Street may not rely on sales metrics but instead use a different valuation metric, such as profit, he said.

“The margins on their business will make all the difference, and of course the use of proceeds and composition of the present balance sheet,” Bahnsen said in an email.

He said the company’s technology can add $1 billion in annual sales, pointing to sophisticated tools for monitoring websites organizing protests against clients, and an Uber-like application to help security guards quickly apply for jobs. It’s also introducing security robots at a variety of places to work in tandem with human guards.

The U.S. Security Associates purchase expands the company’s presence to Canada, the United Kingdom and Latin America. It also enters the consulting and investigations business and event staffing.

While the annual security guard industry is about $45 billion, the total addressable market is more than double at about $100 billion when cyber and infrastructure security are included, he said.

“Our focus is on transforming the security industry. That transformation is not only people, but also technology,” which Vollero has much experience in, he said.

Snap positioned itself as more than just an app developer by calling itself “a camera company.” Its prospectus argued that the camera “was a starting point for most products on smartphones.” Its 187 million daily users posted more than 3.5 billion photos a day on Snapchat last year.

“At Snap, I understood the technology,” Vollero said. “A lot of the skills there are transferrable. It’s about hiring the right people, executing the right brand.”

Allied Universal has “appealing margins” and is generating a lot of cash, he said.

“At the end of the day, there’s plenty of growth here,” Vollero said.