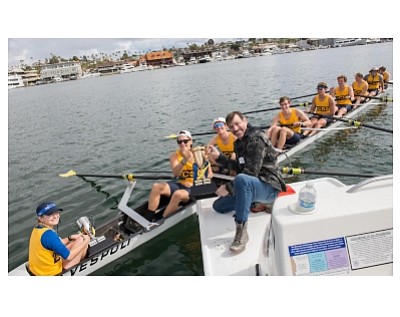 Broadcom Corp. co-founder Henry Nicholas is donating $40,000 to ensure the men and women crew teams at University of California-Irvine will participate in the 2018 American Collegiate Rowing Association National Championship Regatta in May in Georgia.

“Crew is a sport that gets very little glory, but requires tremendous commitment, heart and character,” Nicholas said after the lunch ceremony. “I am extremely proud of all of the superb scholar-athletes who competed and gave it their all, and I am especially proud of the UCI crew teams. They deserve to go to Nationals and compete with the best.”

UCSB took home the trophy in the men’s and women’s bracket.

Nicholas, one of Orange County’s most wealthy and generous philanthropists, has been a long-time supporter of UCI crew, donating more than $1 million to the program.

Nicholas established Broadcom in 1991 in a spare bedroom of his Redondo Beach home with Henry Samueli before moving the company to Irvine, where the duo became billionaires following the company’s initial public offering in 1999 and ascension to a global leader in communications chips.

Dozens of students from the academic center watched the Regatta from an observation boat.

The occasion marked the first time many of these students were on a boat.

Broadcom Corp. last year was sold for $37 billion to Singapore-based Avago Technologies Inc. and renamed Broadcom Ltd., with its U.S. headquarters in San Jose. That deal helped vault Nicholas to No. 6 on our 2017 List of OC’s Wealthiest, a personal fortune of $3.5 billion per the Business Journal’s estimate.