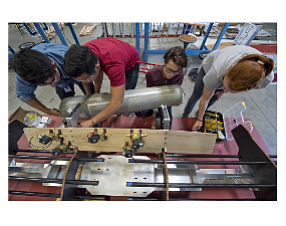 A University of California-Irvine engineering team will compete with more than 30 academic and independent engineering teams from around the world to determine which has designed and built the best “human-scale pod” for the Hyperloop transportation system.

The Hyperloop—essentially a high-speed, ground-transport system —has been proposed by SpaceX and Tesla Motors Chief Executive Elon Musk. Pods will be evaluated for speed, stability, braking and smoothness of ride on a 1.25-kilometer track constructed for the competition on Sunday at SpaceX headquarters in Hawthorne.

UCI’s “HyperXite” team has about 50 students from the school’s Henry Samueli School of Engineering and Donald Bren School of Information & Computer Sciences. The team has been working for more than a year on “a tubular vehicle designed to travel through a near-vacuum tube at high speeds with great efficiency,” the university said. The pod is made of strong, lightweight carbon fiber, and can levitate, carry passengers and cargo, and come to a safe stop.

The HyperXite team placed fifth at a design competition in Texas in early 2016, the highest of any California school, to qualify for the competition.