A Smorgasbord of Restaurants 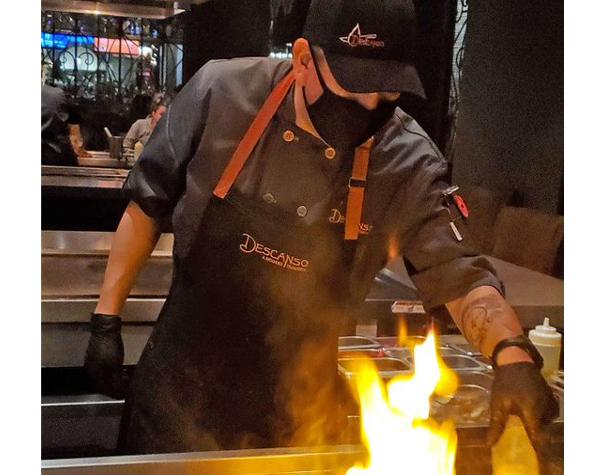 Descanso in Costa Mesa has reopened much of its indoor dining areas, including the popular Plancha Tables, which have been closed since last year.

The Plancha tables are similar to the familiar Japanese Teppanyaki tables, where a chef prepares a meal for eight people seated around a large grill. Of course, Descanso cuisine is Mexican, so the menu options range from al pastor to skirt steak to chili rellanos.

I was invited to a media event at Descanso last month to get the full Plancha experience. Our server took our order, which the chef fixed for our table. Most of the guests at my Plancha grill ordered steak, so I took the opposite route and decided to see what the chef could do with salmon.

Our chef was a flurry of activity, preparing each course to the guest’s specifications, while simultaneously grilling rice and vegetables.

My salmon was perfect, with a touch of spice.

The Plancha tables are open nightly—except Tuesdays starting May 25, when the Plancha room is transformed into a streetside taco stand for Taquero Tuesdays.

For one night each week, the Plancha Room will serve up flavorful tacos made with expertly grilled meats and vegetables as an interactive taco bar experience.

The Taquero Tuesday menu highlights gourmet $2 Street Tacos and $3 Quesadillas with a choice of steak, chicken, carnitas or shrimp. Dishes are served with traditional streetside toppings including housemade salsa, cilantro and onions.

Miirch Social, a new Indian concept in Downtown Fullerton in the Soco District, opened several months ago in the middle of a pandemic.

Apparently the Soco (South of Commonwealth) District has a handful of notable eateries including Roscoe’s Famous Deli, Matador Cantina, and J’s Korean Cuisine, and a vibrant nightlife. Miirch is the latest addition to that scene.

“At Miirch Social, we have not only taken some of the staples of Indian cuisine, but we have also added flavors and influence from other parts of the world to bring guests a truly unique culinary experience,” said Miirch founder Jesse Singh. “Part of that experience includes the rich and engaging social atmosphere that we strive to cultivate at Miirch.”

Of course, when Miirch first opened, the atmosphere was relegated to takeout and delivery, but now Miirch has opened safely for indoor and patio dining.

Singh said that standout dishes include chicken, lamb, or paneer kathi rolls, masala fries, and a Miirch speciality: Truffle Oil Chicken Tikka, a signature Indian-spiced chicken prepared with a creamy marinade that is roasted in the tandoor oven.

Singh said he chose Downtown Fullerton because the area mirrored the desired ambiance of the concept of socializing. The restaurant boasts a large cartoon style mural of notable Orange County landmarks painted by illustrator and caricaturist Cory Van Leperen.

Old Towne Orange has become something of a culinary mecca, even during the pandemic.

Two blocks of Glassell have been barricaded from traffic and dozens of tables added so patrons of the many local restaurants can safely dine al fresco. Even now, with indoor dining returning, the tables are generally filled night and day.

Bosscat Libations recently opened its second OC location in Old Towne (its flagship location is near the John Wayne Airport in Newport Beach), and the place has been busy from Day One.

The owners of O SEA are hoping for the same success when their restaurant opens in Old Towne Orange later this month.

This concept comes courtesy of Mike Flynn, the former assistant general manager of Water Grill South Coast Plaza and general manager of Water Grill Los Angeles. The restaurant is billed as “a modern experience that focuses on progressive seafood cuisine and responsible sourcing in a fine-casual setting.” The seasonally driven menu is curated by Executive Chef David Yamaguchi, whose previous experience includes helping to open Water Grill across from South Coast Plaza.

“My goal is for O SEA to become that neighborhood favorite known for its from-scratch seafood cuisine, but I also want to address the serious reality that we as consumers must change how we approach seafood,” said Flynn, who has spent his career working almost exclusively in seafood restaurants. “My deep passion for responsible coastal cuisine led me to develop this concept, which has been designed to make seafood approachable, contemporary, and just plain fun for our guests.”