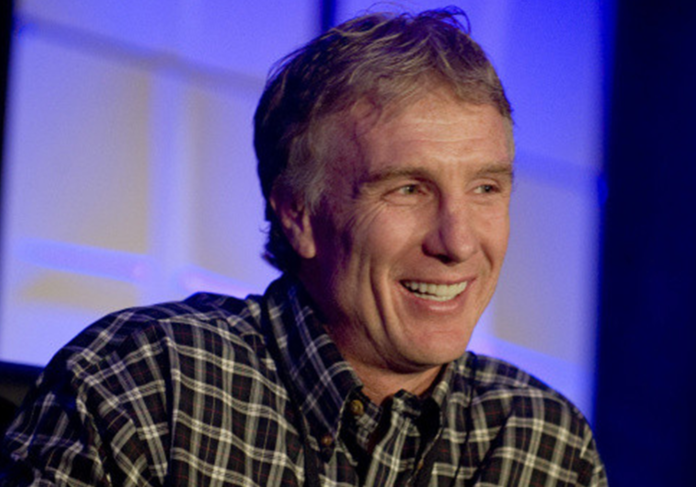 Vinny Smith has done it again—thanks in part to a real estate connection, and Elon Musk.

The multibillionaire tech exec and investor with the Midas touch bought into Nikola Corp. (Nasdaq: NKLA) about six months before the Phoenix-based maker of battery- and hydrogen-electric vehicles went public via reverse merger in early June.

Despite a drop-off over the past few weeks, Nikola’s market cap, estimated at around $4 billion in March, still stood close to $13 billion at press time. Not bad for a company with no significant revenue and an accumulated deficit of about $220 million.

“We see transformational opportunities in hydrogen and electric trucking, and have made our largest investments there,” Smith told the Business Journal last week.

Count Smith as another beneficiary of the Tesla effect: investors have flocked to Musk’s EV carmaker (Nasdaq: TSLA) this year, driving its value to nearly $300 billion, a valuation larger than that of Ford, General Motors and Toyota combined.

“Nikola is the Tesla of long-haul trucking,” Matt Gless, the family office manager for Smith, told the Business Journal.

Another beneficiary of the Tesla effect: local resident RJ Scaringe, founder of EV truck and SUV maker Rivian, which is in the process of consolidating much of its operations in Irvine.

The Business Journal estimates Scaringe’s wealth in the $1.5 billion range, after a new funding round announced this month (see page 24). He’s the highest-ranking new entry among full-time residents on our latest OC’s Wealthiest list, coming in at No. 23.

Smith, meanwhile, ranks No. 13 on this week’s list. We boosted his estimated wealth 4% to $2.5 billion, based on Nikola, the profitable sale of another software firm and growing valuations on his other ventures including a new fund targeting the cannabis industry.

Smith’s initial fortune came from the sale of Quest Software to Dell in 2012 for $2.4 billion, a deal that netted him about $800 million.

He then started Toba Capital. One of its earliest investments was Alteryx Inc. when it was valued at $100 million, well below its current valuation of $11.5 billion.

Other investments of Smith have been more quixotic and less tech-focused, including a short-lived ownership of a pro soccer club in Croatia.

The Toba Capital website lists 33 current investments. It also lists 24 investments that have been sold or went public.

Smith and Toba have been plenty busy this year, outside his EV truck investments.

In May, Seal Software Ltd., a San Francisco-based firm that permits corporations such as banks to use artificial intelligence to study contracts of any file type to quickly understand risks, was sold for about $185 million in cash to DocuSign. Toba in 2018 invested $30 million for a 65% ownership in Seal Software, making it a “nice exit,” Gless said.

Another Toba investment that recently changed hands: Newport Beach-based NextVR, which provided virtual reality experiences for viewing live events with headsets from PlayStation and Oculus among others. It was sold in May to Apple Inc. for an undisclosed amount: news reports estimate the price in the $100 million range.

In the past year, Smith started a fund called Gron Ventures, which focuses on the cannabis industry. It’s raised $150 million, including a 65% stake from Toba Capital. The fund is investing from $5 million to $15 million in each company.

“We have made investments in some incredible future brands and companies that will lead the market,” Smith said.

Among those investments are:

• Cookies, which was founded in 2012 in San Francisco by rapper Berner. It sells 50 cannabis varieties and product lines with names such as “Gelato” and “GSC,” which is also known as “Girl Scout Cookies.”

• Dutchie is a website like Shopify except it targets the cannabis industry by connecting consumers with local dispensaries. The Bend, Ore.-based company last September received a $15 million Series A investment from, besides Gron, Snoop Dogg’s Casa Verde Capital, Kevin Durant’s Thirty Five Ventures and founders of DoorDash.

“It’s also going to be a national player like Budweiser,” Gless said.

Smith is also investing in environmental areas such as climate control, reforestation and indigenous agriculture.

“We are targeting between $50 million and $100 million per year into these efforts, and we believe a mix of market-based and charitable solutions are required: innovation and intervention are complimentary,” Smith said.

“We’re paying attention to nuclear power and technical carbon capture solutions in soil and forestry, from silvopasture to satellite modeling of forests for certification of carbon credits. And we see a new wave of meat alternatives coming to market that will provide enhanced nutrition and flavor without excessive processing or the environmental toll of factory farming.

“We’re also backing local and national organizations focused on food rescue—we waste as much as 40% of our agricultural productivity, and there are solutions. In all of these areas we believe the future is bright,” Smith said.

It was that environmental focus that led him to Nikola, which went public in June through a reverse merger with VectoIQ Acquisition Corp., a publicly traded special purpose acquisition company, also known as a SPAC.

Nikola, which was named after the famous battery inventor Nikola Tesla, is led by Chief Executive Trevor Milton.

The company has $15 billion in pre-orders, Gless said.

It proved fortuitous that Milton paid $32.5 million last November to buy a 2,000-acre ranch in Utah, one of the costliest residential sales in Utah history.

The seller of the estate, some 50 miles east of Salt Lake City?

“We got to know Trevor quite well” because of that real estate deal, Gless said.

“Trevor was impressive. We got to know his business well and gained confidence to make the investment.”