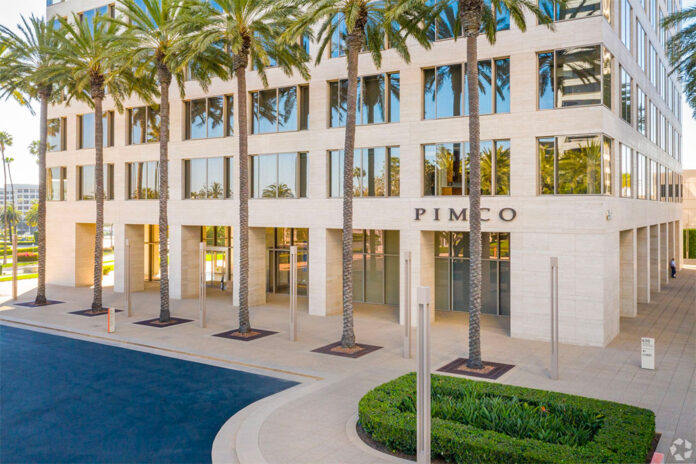 Dan Ivascyn is having perhaps his worst year ever as a portfolio manager, as his two biggest funds are down more than 10% year-to-date.

“I’m not suggesting that we’re at the bottom for bond prices, but things are looking a lot a lot better,” Ivascyn told the Business Journal during an Oct. 18 interview.

“We’re a lot more optimistic today than we were entering this year, although it’s been a rough year.”

Ivascyn is one of the world’s most sophisticated investors, serving as the chief investment officer at Newport Beach’s Pacific Investment Management Co., commonly known as Pimco.

His canny investments during the 2008 crisis helped lead his bond fund in subsequent years to have equity-like returns that sometimes topped 20%.

Morningstar named him Fixed-Income Fund Manager of the Year for 2013, and he was inducted into the Fixed Income Analysts Society Hall of Fame in 2019.

Ivascyn was named the Business Journal’s executive of the year in 2017, along with Pimco CEO Manny Roman, for stopping the outflows from Orange County’s biggest financial firm after the acrimonious department in 2014 of legendary Bond King Bill Gross.

Pimco, like the rest of Wall Street, is having a tough year, as assets under management have fallen from $2.2 trillion on Dec. 31 to $1.7 trillion as of Sept. 30.

Ivascyn’s own Income Fund (PIMIX) and Total Return Fund (PTTRX) are down 12% and 17% respectively year-to-date.

The firm has diversified into nontraditional assets like real estate, including the Intersect office campus in Irvine. It’s taken large equity ownership stakes in companies such as retailer Nieman Marcus and the utility Pacific Gas & Electric.

“We’re leveraging our size to do interesting things,” Ivascyn said.

Looking comfortable without a tie and sporting a beard, Ivascyn spoke with the Business Journal for 45 minutes on the 21st floor of Pimco’s headquarters along Newport Center Drive.

The following is an edited transcript of the interview.

OCBJ: How is Pimco different from when you first joined in 1998?

IVASCYN: Back when I joined, we were mostly focused on bonds.

In general, they were simpler strategies, much less complexity than what we see today. Technology matters a lot more today than it did.

We have grown in areas that are complementary to what we have done in the past.

When we’ve attempted to move into areas that were very different than the past, we’ve had less success. For example, moving into public fundamental equities didn’t go as well as we would have liked.

What’s been quite exciting for the firm and where we have generated strong returns are areas like real estate and expanding from public corporate credit markets to private corporate markets.

We’ve gone from one of the largest holders of commercial-backed securities that trade within the public marketplace and have shifted into the private opportunity set where we put together portfolios of private loans backed by commercial real estate properties. It’s an almost identical underwriting process, just one is in the public space the other in the private area of the market.

OCBJ: Pimco became famous for avoiding the subprime-caused financial crisis of 2007-08. Do you see a similar type of environment in what may be a recession?

IVASCYN: We don’t see the same degree of in-balances or irresponsible risks taken that led up to the (2008) global financial crisis. We don’t think there will be as much downside risks.

Problems will crop up, like what we’re seeing that in the United Kingdom in the last couple of weeks.

We do think there will be some disappointments in the corporate credit markets because underwriting standards deteriorated more than other areas of the market so corporate downgrades in the fall may surprise a little bit to the upside.

We expect a lot of volatility going into yearend so 2023 will continue to be a volatile environment.

OCBJ: Pimco is known for being well tuned into the Federal Reserve (former Chairman Ben Bernanke is a senior adviser). What will the ­Fed be doing?

IVASCYN: We think the Fed’s dead set on tightening policy to get the inflation trajectory to reverse. Our sense is that we see inflation trending lower probably ending 2023 somewhere in the high threes maybe even 4%.

We think investors should get comfortable with a federal funds rate of somewhere around 4% to 4.5% then the likelihood for a pause while they look at that data and they’re going to want to see a steady downward trend in inflation. If they don’t see a steady decline, we do think they’d be willing to tighten policy further.

We think they’ll keep rates quite high for quite some time. We don’t think we’re heading into another ’70s risk scenario (of interest rates above 10%).

OCBJ: How would you characterize this year on Wall Street?

IVASCYN: COVID created a tremendous amount of uncertainty and because of that, you saw massive fiscal spending on the order of $6 trillion at the same time central banks were providing a lot of accommodations to markets. That led to a very powerful recovery in the second half of 2020 and going into 2021.

What we ended up with is inflation. Obviously, home prices, stocks, crypto assets went up a lot. This pullback, pulling liquidity out of the system, is payback for the big stimulus.

During much of our careers, when stock prices were going down, bond prices had a tendency to go higher. Now, there are very few places to hide. You could hide in cash I guess but the problem is yields on cash assets are below the current rate of inflation.

A good simple proxy I use is the right end of the curve where you see two-year type maturity Treasury yields up at almost 4.5%. You can buy a high-quality investment grade company where you get 2 percentage points more than a government bond. You’re looking at a 6.5% type return, not bad for an intermediate bond investment.

So, we do think 2023 and 2024 will be a more positive asset for fixed income assets even though you know central banks still have a lot of wood to chop up regarding inflation.

OCBJ: You said there was no place to hide this year. Was that a one-off or is that the way it’ll be going forward?

IVASCYN: We don’t think you will see a repeat of this year’s performance with double-digit declines across both bond and equity markets. The next five to 10 years though could be more challenging for investors than the prior five or 10 years.

OCBJ: Is Pimco planning to stay in Orange County?

IVASCYN: We don’t have any intentions of leaving. We have 1,300 employees here in Newport Beach.

We’ve been very pleased to be in Newport Beach. It offers a different perspective than being in New York City or other significant financial hubs. Here in Newport Beach, you’re a little bit removed from noise.

OCBJ: You have 3,380 companywide employees. Are you cutting jobs, staying the same, or hiring?

IVASCYN: We’ll see. We have some small growth penciled in for next year. A lot will depend on markets and in the overall industry dynamic.

Our base case view is that there will be a mild recession because we’ve entered this period with very strong household balance sheets. We know a lot of households have been able to take advantage of record lows in rates during 2021 to term out household debt. A stat I like to mention is that over half of those homeowners with mortgages were able to refinance into a deal with a 3% to 3.5% type coupon mortgage.

Corporations were able to term out their debt at very low rates, so balance sheets are reasonably strong there. Banks have a lot of capital today given that they were highly regulated in response to the financial crisis more than 10 years ago.

I don’t want to sound overly complacent, given that you have a lot of uncertainty out there, given you have very high inflation, war in Europe, central bank tightening.

OCBJ: Pimco has a reputation for its employees dressing well. Is there a new relaxed dress code?

IVASCYN: I used to be a fairly hard liner on dress. But once we confronted the COVID situation, we relaxed the dress code quite significantly. We’re responding to client preferences. We see clients show up to our offices in more casual attire. Even our most conservative clients will surprise us by coming in pretty relaxed.

OCBJ: You have the reputation as a work horse. What do you do for fun?

IVASCYN: We all work hard. I’m a recent parent. I started late in life. I have a 3-year-old and a 5-year-old. I spend a lot of time with them. The kids keep me busy.