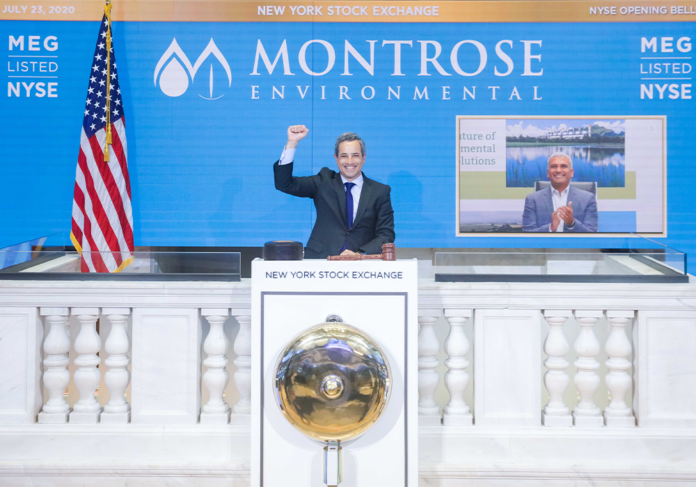 Irvine-based Montrose Environmental Group Inc. jumped out of the gates on Wall Street last week with its shares soaring 47% to a valuation approaching half a billion dollars.

“It feels good,” Chief Executive Vijay Manthripragada told the Business Journal hours after it went public. “I don’t know how else to say it. I’m a bit tired. It’s been quite a ride.”

The 43-year-old Manthripragada “virtually” rang the opening bell July 23 on the New York Stock Exchange, where it now trades under the ticker “MEG.”

It’s the second OC-based company to go public via a traditional IPO this year. Irvine-based medical device maker Inari Medical Inc. (Nasdaq: NARI) has been a success as its shares have almost tripled since its IPO in May. Inari now ranks No. 11 among public companies in the county with a value of about $2.7 billion.

“The book was way over subscribed but our underwriters said that given the market’s volatility, they wanted us to go out at a steep discount,” Manthripragada said.

“Pricing is more art than science. The science may have guided us higher, but the bankers wanted us to go lower.”

Montrose was formed in 2012 and employs some 1,730 people in 70 locations. Its headquarters are at the Jamboree Center office complex, next to the San Diego (405) Freeway.

Montrose’s largest institutional investor is Los Angeles-based Oaktree Capital Management LP, which has a 14.9% stake in the company, according to the company’s prospectus.

Montrose, which generated $233.9 million in sales last year, has more than doubled its revenue over the past three years.

It has about 4,500 clients that range from governments to gas companies to utilities. Its units provide services like treating contaminated water, permitting work for large infrastructure projects, finding ways to reduce the carbon intensity of operations and converting waste to renewable energy.

Hot topics like aging infrastructure and climate change have increased awareness of the need for environmental services, Manthripragada said. It’s an industry not susceptible to a changing of top executives or elected politicians because the younger generation wants to protect the environment, he added.

Besides organic growth, it will continue its aggressive acquisition strategy in an industry that’s ripe for a roll-up approach.

The company has made more than 50 acquisitions over its history, including seven deals in each of 2018 and 2019, with a cumulative value of $58 million and $98 million, respectively.

This year, it has completed just one deal, but it was its largest buy to date: Little Rock, Ark.-based Center for Toxicology and Environmental Health LLC, an environmental and scientific consulting company that specializes in response and toxicology work for “major environmental events” including natural disasters.

Amoritization expenses related to the acquisitions are a large part of why the company has posted a loss in recent years; including $23.6 million in 2019. It an accumulated deficit of $64.4 million.

“It’s a $1.2 trillion industry and there’s no brand that dominates it.”

This IPO is Manthripragada’s first as a CEO.

“Doing this virtually was an odd experience,” he said. CFO Allan Dicks “and I met with over 130 people, staring at people in various stages of undress.”

What does the company need to do to succeed on Wall Street?

“Convince them that we’re going to take over the world,” he quipped.

He also told investors and analysts to expect continued 30% growth in annual revenue and an expanding profit margin.

“We have a unique story,” he said. “It’s so much fun telling our story.”

The company intends to keep its headquarters in Irvine.