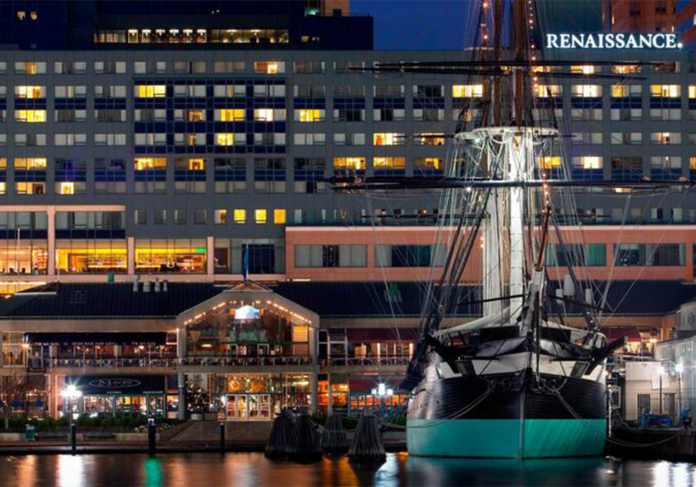 Sunstone Hotel Investors Inc. is nearing a deal to sell a hotel it owns in downtown Baltimore at a 20% discount to its value pre-coronavirus, according to news reports.

A recent article in the Wall Street Journal said that the Irvine-based real estate investment trust, which owns 20 hotels in the U.S., was nearing a deal to sell the Renaissance Baltimore Harborplace Hotel.

The buyer of the 622-room hotel is expected to be Washington, D.C.-based Buccini/Pollin Group Inc.

That’s down from a previously agreed value, the WSJ reports.

“The buyer had signed a contract to buy the hotel for $100 million before the pandemic, but [Sunstone] agreed to the lower price after the crisis hit, according to people familiar with the matter,” the report said.

The property sits in the heart of Baltimore’s Inner Harbor, the main entertainment area in the city’s downtown. The hotel derives a large amount of business from the city’s nearby convention center, as well as visitors of Camden Yards, home of the Baltimore Orioles, which is a few blocks away.

Neither facility is getting much use now. The convention center is being used as a free COVID-19 testing site for locals.

The hotel has remained open during the pandemic, according to Sunstone officials.

The REIT had already written down the value of the property.

In 2019, “we identified indicators of impairment at the Renaissance Harborplace associated with declining demand trends at both the hotel and in the Baltimore market, along with our plan for the hotel’s estimated hold period, resulting in us recording a $24.7 million impairment loss,” it said in its last annual report, filed prior to the pandemic.

Buccini/Pollin Group is looking to raise more than $15 million of the purchase price for the Baltimore hotel through commercial real estate crowdfunding site CrowdStreet.

CrowdStreet’s website last week indicated that fundraising for the deal closed on June 19, and that a closing on the hotel sale was currently in progress. Sunstone’s website still included the hotel among its portfolio as of last week.

The WSJ report indicated that crowdfunding deals are trading at discounted prices compared with pre-pandemic levels; apartment buildings are being sold on CrowdStreet for 5% to 10% less than what they would have fetched before the outbreak, for example.

The June 15 print edition of the Business Journal detailed another East Coast hotel that Sunstone, OC’s 12th-largest public company with a $1.7 billion market value, was considering disposing of, due in part to pandemic issue.

Sunstone (NYSE: SHO) gave a heads up to investors and analysts last month during a first-quarter earnings conference call that it is working with a special servicer on options for the Hilton Times Square.

The operator did not make its May 1 debt service payment for the 460-room property, it said last month.

The coronavirus pandemic and the resulting halt on travel has only exacerbated the N.Y. property’s financial profile, which was already suffering prior to March largely due to a large increase in rent for the hotel’s ground lease.

“At this moment, we’re working with the special servicer on the options which could include a receiver going into effect. If a receiver goes into effect, then the conclusion would be some sort of central foreclosure or other item,” said Chief Financial Officer Bryan Giglia.

“This is not a decision that we take lightly, but given the challenging circumstances and the confluence of material valuation hits this hotel has sustained, we believe that this is the right outcome for our shareholders,” Giglia told analysts.

The company said at the time that other dispositions were possible, but that heavily discounted deals wouldn’t be made.

There are “a small handful of hotels that do not fit our strategy that we would eventually like to sell,” Chief Executive John Arabia told analysts. “We have no pressure to sell these hotels. We have no desire to give them away.”

At the end of the first quarter of 2020, Sunstone had a $547 million cash balance. That could be used for acquisitions going forward, officials said last month.

“While this downturn is worse than we had planned for, our conservative leverage profile gives us the safety to weather a no-revenue environment for an extended period of time, while also positioning us to be one of the first companies able to take advantage of the significant dislocation we expect in the private hotel market,” Arabia said.

Arabia also said the coronavirus have a potential 25% to 35% discount on the value of hotels, which could create a positive acquisition environment.

“When we come out of this, we think we will have significantly more options than many of our peers,” Giglia said.