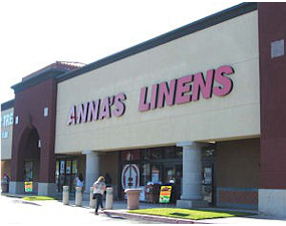 The home goods retailer is also negotiating a sale with DW Partners LP in New York. The asset management firm would become “the stalking horse” bidder, and make the initial bid in a bankruptcy auction sale.

Anna’s Linens said in its bankruptcy filings that its liabilities range between $100 million to $500 million. Unsecured claims include $3.9 million owed to Welcome Industrial in Deer Park, N.Y; $3.6 million to Shewak Lajwanti Home Fashions Inc. in Vernon; and $3.1 million to S. Lichtenberg and Co. in New York.

Anna’s Linens generates more than $300 million in annual revenue, according to court documents.

Anna’s Linens filed for bankruptcy in 1993 and emerged from the process in 1994.

In 2002, when it had about 80 stores, it sold 25% of itself to San Francisco-based private equity firm Rosewood Capital for $25 million to open 60 stores and pay down debt.

The former makes “secured, asset-based loans,” and the latter “invests in and lends to stressed and distressed companies,” according to the firms’ respective websites.