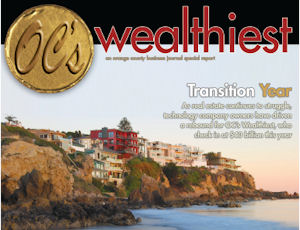 The wealthiest of Orange County saw their value rise in the past 12 months—boosted by a technology rebound, but tempered by ongoing woes in real estate.

The 32 people here on our annual OC’s Wealthiest list have a combined estimated worth of $40 billion, up 8% from a year ago (see centerfold insert).

Much of the gain was a bounce off the bottom for a handful of people whose wealth is tied to technology, echoing a 15% gain in the tech-heavy Nasdaq in the past 12 months.

They’re estimated to have seen a 57% gain to $2.75 billion each with a rebound in prices for memory chips and the economy.

Henry Samueli, cofounder and chief technical officer of Irvine chipmaker Broadcom Corp., is estimated to have seen a 28% rise in his $2.3 billion wealth with a gain in the company’s shares.

Yet it’s clearly been a transition year after the downturn of late 2008 and 2009 took a toll on just about all types of investment.

Real estate, which represents a sizable chunk of the wealth on our list, continues to struggle, with most in the industry estimated lower this year.

The exception: Irvine Company’s Donald Bren, the list’s perennial No. 1. We kept our $12 billion estimate for him unchanged, a move that’s likely to be a point of debate for readers as it was for us. See story, page 22.

The list, made up of real estate owners, entrepreneurs and heirs, includes a handful of newcomers, including drug developer Pawan Seth and flat TV seller William Wang.

We also list some 60 other wealthy here in our Other Centimillionaires, a look at those estimated to be worth $100 million or more.

Our OC’s Wealthiest special report with our list, profiles and other stories continues in this issue.