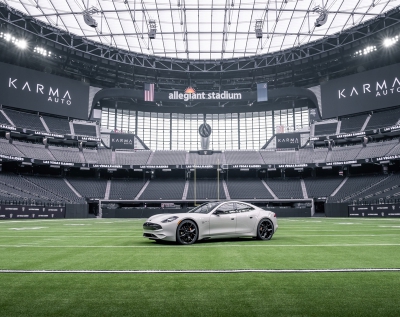 Irvine-based Karma Automotive said it struck a sponsorship deal with the Las Vegas Raiders that will give it a presence at Allegiant Stadium.

The deal makes Karma the official luxury vehicle of the Las Vegas Raiders and the team’s newly built Allegiant Stadium in Vegas.

Karma branding will appear throughout the stadium, a parking area with branded electric vehicle charging stations and the exterior digital marquee along Interstate 15. The automaker will also be a sponsor on some Raiders events.

The vehicle maker isn’t the only OC company positioning itself alongside the Raiders.

Irvine-based In-N-Out Burger is expected to have a retro-inspired location within walking distance of Allegiant Stadium.