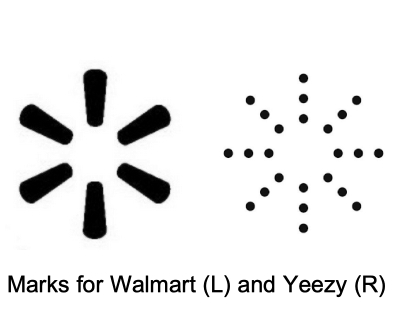 Kanye West’s apparel company Yeezy LLC, which is registered in La Palma, is seeing pushback from Walmart attorneys over its use of a sun ray logo they argue is too similar to the retailer’s own trademark.

Walmart filed an opposition to Yeezy’s use of its trademark to the U.S. Patent and Trademark Office saying it will be “damaged by registration” of the Yeezy trademark application. It went on to argue West’s company’s logo “is likely to cause confusion, mistake and deception.”

Yeezy, which is the holding company for West’s businesses, lists La Palma for its office address. The address served as the office of the company’s former general counsel, who left in January.