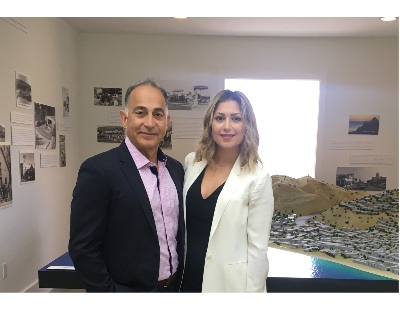 Mo Honarkar, a longtime Laguna Beach resident, businessman and investor in many of the city’s best-known properties, has a $1 billion plan to revitalize his hometown.

His proposal: a mix of new and redeveloped boutique hotels, hotel casitas and modestly priced apartments, art and education-related space and other commercial projects in a variety of spots along Coast Highway and Laguna Canyon Road. It would be the largest undertaking of its type in the famed coastal city in decades.

It’s a much-needed boost to the city’s flagging downtown, which increasingly is seeing shops and other businesses close their doors, due to a longtime slow-growth mentality at the beach city that’s gradually morphed into a no-growth one, Honarkar argues.

“It’s becoming a ghost town,” said Honarkar, among the city’s largest investors with a fortune the Business Journal estimates at around $500 million, thanks to a collection of varied business interests he’s built up over the past few decades (see profile, page 37).

“For years, a vocal minority has made it difficult for anyone from outside the area to do any development.”

That’s one reason Honarkar thinks his ambitious plan, now in the planning process, has a chance to succeed.

Honarkar—who has lived in the city for over 20 years—has possibly assembled the largest collection of buildings and properties in Laguna Beach; he owns or controls numerous well-known sites including the Royal Hawaiian and Terra Laguna Beach restaurants, the Seven Degrees wedding venue and the 14 West boutique hotel.

In January, he made his most prominent real estate deal yet, taking over seven properties along South Coast Highway, including the iconic Hotel Laguna.

That long-term land lease agreement gives his firm control of all but one building between Laguna Avenue and Legion Street in the Central Bluffs neighborhood of the city, all along Coast Highway.

The best-known site Honarkar is taking over is Hotel Laguna, a 64-room property next to the Main Beach Park in the heart of downtown.

It’s one of the oldest buildings in the city with roots dating back to the 1880s. Its current structure was reportedly built around 1930. It’s been closed since the end of 2017.

“We would restore it to its original look,” while also adding a pool, rooftop bar and casitas to the site, he said.

The design has input from the National Register of Historic Places; he plans on getting the hotel added to the list.

Details: Restoration of hotel “to its former glory.” Additional 20 or so more hotel rooms, plus some hotel casitas possible. New rooftop bar, expanded restaurant area among other improvements.

Notable: Would be first LEED certified hotel in city.

Details: A terraced, three-story, full-service hotel with 103 rooms above three levels of subterranean parking. Expected to hold 75,000 square feet of hotel space, and will hold small amount of retail and restaurants.

Details: A nearly blocklong development near the Seven Degrees events venue now envisioned to include student housing for nearby arts school, senior and workforce housing, expansive underground parking. Details still being worked on.

Details: Located at the southeast intersection of Laguna Canyon Road and Canyon Acres Drive; plan is for two levels of apartment units over one level of parking.

Notable: Intention is to provide senior and workforce housing.

A Long Process in Laguna

Mo Honarkar founded 4G Wireless in the late 1990s after noticing heavy traffic at an Irvine AirTouch cellphone store. “I saw a line of people going in all the time,” he told Stu News Laguna in a prior interview.

Over an 18-year period, he opened and closed hundreds of stores. One of his toughest challenges was opening a Verizon outpost in his hometown of Laguna Beach—it faced numerous questions and pushback from locals before ultimately getting approval—he said.

That process gives him an appreciation for the work required to get his current real estate development plans off the ground.

His Laguna Beach Co. got an early-stage OK from the city earlier this month to move ahead on six separate projects under a unified environmental impact report.

There’s still plenty of hoops to jump through before any construction can begin; it still has to get full review from the Laguna Beach’s Planning Commission and City Council, as well as the California Coastal Commission.

City officials have emphasized getting the Hotel Laguna project moving ahead first, so the shuttered site next to Main Beach can reopen.

Also likely to have a voice in the proceedings: Village Laguna, a longstanding local activist group that promotes preservation of the city’s historical buildings, and long has had influence in city government.

The political action committee’s members are also involved in providing meals to the area’s homeless, and it also runs the Charm House Tour, an annual bus ride that showcases Laguna Beach homes, for about $50 per person.

In Honarkar’s mind, the group’s efforts have been to stop any improvements since the 1970s.

The PAC is likely to have an outsized influence in next year’s city council elections, a vote that could ultimately decide whether his projects and the community move ahead.

Bill Shopoff, a fellow real estate developer from Laguna Beach who is no stranger to getting tough projects through the approval process—he’s responsible for the Uptown Newport development along Jamboree Road getting entitled—has taken Village Laguna to task in the past.

His family is involved in a year-old pro-business PAC, called Liberate Laguna, that has argued that Village Laguna “does not file appropriate taxes or properly disclose campaign donations and that the organization has contributed more to local campaigns than is legally allowed,” according to late 2018 report in the Daily Pilot.

Shopoff, who has never built in Laguna Beach and has no plans to, has expressed support for Honarkar’s projects. He said earlier this month that his firm was “doing it the right way” with its plans to introduce multiple projects at the same time, to “give us a better vision of what our city is going to look like.”

Village Laguna isn’t the only slow-growth group in the city.

The Canyon Alliance of Neighborhoods Defense Organization, or CANDO, said its goal is to “preserve the rural, low-density and small-scale character of Laguna Canyon.”

Honarkar owns several sites in the Canyon, which is part of his unified redevelopment plan for the city. He’s questioned the group’s willingness to work on any project that alters the current look of the sparsely populated area outside of the already preserved open space.

CANDO has cited Honarkar’s apartment development proposed for the area as a “high-density project with perhaps 60 or more residents.”