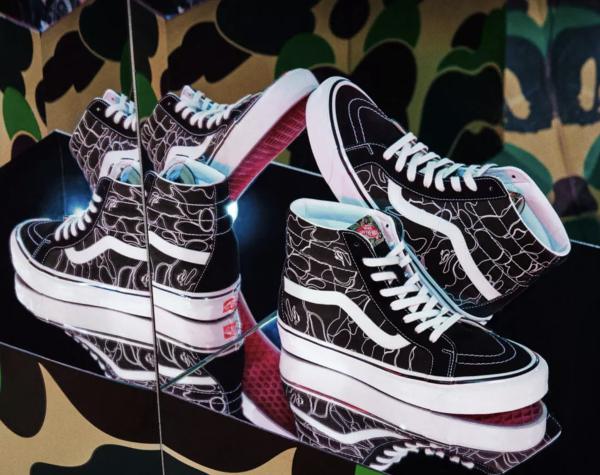 Vans Inc. is no stranger to tapping into pop culture.

In 1982, sales at the footwear firm went “through the roof” with the release of the movie Fast Times at Ridgemont High, according to Vans co-founder Paul Van Doren.

Sean Penn played Jeff Spicoli, “a lovable stoner character who always wore Vans,” wrote Van Doren, who died in May at the age of 90, in his recently released memoir Authentic.

“When audiences saw the movie, orders for the checkerboard style exploded. The film launched Vans nationwide,” Van Doren said in the memoir, which was excerpted by the Business Journal earlier this year.

Fast forward to 2021, and the Costa Mesa company, OC’s largest apparel and footwear company by revenue, enjoyed what execs described as a “nice spike” in sales of its white slip-ons. It was thanks to Squid Game, the popular Korean drama series on Netflix, where players put their lives on the line to participate in children’s games for a cash prize.

Vans’ white slip-ons are similar to the ones worn by the show’s contestants, and were snapped up by people looking for of-the-moment Halloween costumes, among other uses.

Squid Game “helped raise the media attention that we’ll leverage, to my point of us leaning into the Classics [footwear] campaign,” said Steve Rendle, president and CEO of Vans’ Denver-based parent VF Corp. (NYSE: VFC), during the company’s latest earnings call with analysts.

“We’ll use this moment and continue to build on Vans’ connection to pop culture,” Rendle said.

To make connections for the next big cultural movement, Vans has increasingly turned to digital.

The company in September launched a Vans World on the online gaming company Roblox Corp.’s (NYSE: RBLX) platform, planting its flag in the metaverse.

It has so far received more than 136,000 thumbs-up, and visits from over 46 million people.

The metaverse, virtual worlds where users’ avatars can meet up to do just about anything they would typically do in real life, is being talked up as the “what’s next” for the internet.

It’s why Facebook Inc. changed its name to Meta in late October and also why other OC brands such as Anaheim-based Pacific Sunwear of California LLC, Chipotle Mexican Grill Inc. of Newport Beach and Hyundai Motor America Inc. in Fountain Valley have all shown up on Roblox.

Vans execs see the metaverse as more than just a marketing play.

Visitors to Vans World, for example, can buy Vans products to accessorize their avatars. That’s just the start, according to Global Brand President Doug Palladini.

“We will be more and more, designing into that world. There might be a shoe that we design that you can only get inside of our Roblox. It’s not physical. You can’t get it at a boutique. There’s no secondary sneakerhead [resale] market for it,” Palladini told the Business Journal.

It’s a big job keeping a brand that helped generate revenue of $3.5 billion in the 12 months ended in March for VF relevant in social, fashion and pop culture conversations.

That’s in addition to balancing production of new designs, a more than 700-store fleet, and the current global supply chain disruption.

In Costa Mesa, the task of steering the business falls on the shoulders of Palladini.

The executive is a veteran of the business, having started at the company in 2004 as its vice president of global marketing. He held the position for eight years, overseeing a $55 million annual marketing budget at the time and a department staff of 85. Vans grew from a $300 million to $1.5 billion enterprise during that span of time, before Palladini was named vice president and general manager of North America, amid a streak of 22 consecutive quarters of double-digit revenue growth.

Digital by far represents the greatest opportunity not only as a sales channel, but mode for pushing the brand and its relevance among the core consumer base. Hence the recent Roblox push.

The company maintains a digital-first philosophy around the consumer.

Part of that is the personalization and the Vans Family loyalty program, launched in 2018 and now nearing 18.5 million members.

It’s helped Vans learn what specific customer they’re working with at any given time to understand if, say, someone is coming to them as a skateboarder or a sneakerhead or more fashion-forward consumer.

Art of the Drop

As all that’s happening online, Palladini and team still have to create physical product that’s coveted.

While stalwarts, such as the slip-on and Old Skool bearing the well-known “Jazz Stripe,” will always remain Vans classics, the company produces a constant stream of collaborations and seasonal merchandise to fill its annual product calendar and provide continuous momentum around sales.

The Vans Horror collection launched in September and nabbed the company’s Americas digital direct-to-consumer business on its fifth highest sales day, with the product selling through within days of the launch as consumers clamored to get their hands on styles such as the Friday the 13th-inspired, glow-in-the-dark slip-on, or “The Shining” Sk8-Hi.

The company more recently began a program called The Drop List, focused on making an online product calendar of limited-edition collaborations available publicly with the date of release and where the merchandise can be purchased.

Vans only recently began formal marketing around The Drop List, after launching it in beta earlier this year, ahead of the holiday selling season.

“We have certain groups of fans that want the latest, most difficult products to find in Vans,” he said.

The idea takes a page from now-sister brand Supreme, which VF paid $2.1 billion for in late 2020.

Supreme started off as a New York shop that focused on quality garments for skaters, married with a high-end boutique feel. The brand further went on to focus on limited-edition product drops, which helped generate buzz and exclusivity.

Consumers on any given Thursday can be seen lined up outside the doors of Supreme stores from Fairfax Avenue in Los Angeles to Bowery in SoHo to get their hands on new releases.

“We’re trying to build that same muscle at Vans, I would say,” Palladini said.

“We’ve always had this great array of exclusive products that drop on a weekly basis, but we haven’t done a great job of letting our fans know about them and giving them a clear path to accessing them,” Palladini said of The Drop List.

Doug Palladini’s position at Vans Inc. requires an adeptness at not only understanding what’s moving the market from a business standpoint, but also from a cultural standpoint.

The company held its annual Checkerboard Day Nov. 18. It’s the company’s largest philanthropic program; this year it was used to support 16 global charities focused on helping build community through the arts, sports, culture and social impact.

The company’s used its social channels, app and website to build momentum around the day.

It’s a philanthropic play and a necessary one to keep in touch with its consumer base, execs say.

“Vans’ purpose is to enable creative expression and we have a mission to become and be the global icon of creative expression particularly in youth culture. So, what we try to do at Vans is we try to be a purpose-led brand and it’s important that for us, it’s not just something you say. It’s not just a poster you hang in the lunch room. It’s the action you take,” Palladini told the Business Journal.

Checkerboard Day is one example. There are countless others the marketing engine must oversee: building of skate parks, inviting talent and other guests to the company’s House of Vans retail formats, giving back, tying the brand into the elements of the action sports world and that’s all across the 100 countries the company’s sells product in.

When last year’s Black Lives Matter movement came to a head, Vans was there, Palladini said.

“Our fans expect Vans to take a stand. They want us to be marching alongside them in the things that are important to them. That could be protecting our planet. That could be racial and social justice, and I would say we would be more at risk by remaining silent and sitting on the sidelines than by being clear about who we are and what we want,” Palladini said.

Consistency on where Vans and any company, particularly those tied to youth culture, can remain trustworthy is now more “mission critical” than ever, according to Palladini.

He added: “We think that there’s a specific type of consumer that is inspired by the same kind of things that we are around creative expression, and so we try to lean in to find those people in this world and try to connect with them, understanding full well there will be people who don’t believe that for whatever reason. And we are OK if they decide then that Vans is not a brand for [them].”