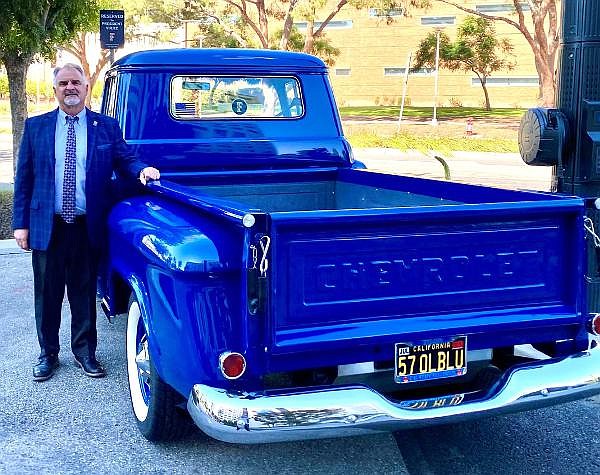 Virjee, president of CSUF on campus with his Titan-blue Chevy pickup that shares the same birth year-1957-as the institution he leads

We at California State University, Fullerton have long celebrated 1957 as the year the only CSU in Orange County opened its doors to the first of what would become our now more than 310,000 alumni.

That is why “1957” is emblazoned on our Titan hats and jackets, or, if you’re like me, stickered across the back window of an old Chevy Pickup (Titan Blue of course) that happens to share the university’s birth year.

The significance of ’57 notwithstanding, this fall, as we returned to campus after 18 months of virtual learning, teaching, and working our way through this global pandemic, it felt as if a new founding year was upon us. No, I don’t think students will have “2021” patches on their CSUF baseball hats in 65 years, but I do believe that the Titan phoenix emerging from the ashes of this pandemic bears little resemblance to the university we were put here to be in 1957.
And rightfully so.

In 1957, Orange County had a small and mostly rural population of just 500,000 residents; today it is the sixth most populous county in the nation.

In 1957, Orange County was more than 90% White; today, it is 41% White, 35% Latinx, 18% Asian, and 2% Black, giving it the ninth highest diversity index in the most diverse state in the continental United States.

To be clear, we at Cal State Fullerton constantly and consistently evolved to better serve the growth and changing face of Orange County. So much so that, in February 2020, just one month before the pandemic touched down, our graduation rates were at all-time highs, our opportunity gaps were at all-time lows, and we were ranked No. 3 in the nation for conferring bachelor’s degrees to historically underrepresented students.

That said, pre-pandemic, I am not sure we fully and deeply grasped who our students are. After all, it is one thing to know that the majority of our students are first-gen, low-income, and/or from historically underrepresented communities, but a whole other thing to witness their realities broadcast through a Zoom screen.

To see what it looks like for students living in cars. To hear what it sounds like in a small apartment in which multiple family members from various generations live. To watch in real time as a student is chased away from a coffee shop because “free Wi-Fi” only applies to those with enough money to purchase coffee.

Just as our students’ realities sunk in more viscerally through the Zoom screens of the thousands of laptops and MiFis we dispersed to eliminate the digital divide, so too did our understanding of the infinite layers of injustice baked into our nation’s history.

With that in mind, on the eve of Social Justice Week 2021, we announced our intention to embed our newly-created “Guiding Principles for Social Justice” in every division and college as a guide for all decision making. The innovative programming born from these principles was immediately evident—from our partnership with the OC Community Foundation to create our Black Student Scholarship Fund to the hiring of the most diverse new cohort of tenure-track faculty in our history.

Progress led to success, including recently becoming one of only four institutions in the nation to be named both an inaugural Fulbright Hispanic-Serving Institution Leader by the U.S. Department of State and a Seal of Excelencia recipient by the nation’s premier authority in advancing Latin American student success.

Further fueled by the investment of many Orange County partners, our inclusive excellence also garnered the attention of two of the world’s most generous but selective philanthropists, MacKenzie Scott and Dan Jewett. And every dollar of their $40 million investment is unrestricted because, to quote Ms. Scott, “people who have experience with inequities are the ones best equipped to design solutions.”

In other words, according to the independent research of one of the most sophisticated philanthropic teams ever assembled, we at CSUF are not only one of the most transformative universities on the planet, but are also best equipped to design solutions that eradicate inequities. This truth was further underscored when, on the very day this transformational gift was announced, more Black and more Latinx earned their bachelor’s degrees than in any other year in our history, and we conferred the most bachelor’s and master’s degrees to historically underrepresented students ever.

A Return to Campus

As we returned to campus this fall on the heels of this success, our vision for our future was radically different than it was when we left in March 2020. Today, we better understand how technology can enhance our in-person Titan experience and vow to leverage that knowledge to eradicate equity gaps.

Today, we better understand the importance of the connective tissue that binds us and aim to strengthen that sinew so all communities truly feel the support of the Titan Family. Today, we better understand the power of civil discourse and commit to being a bolder marketplace of ideas that eliminates misinformation and shapes our respective opinions from the same foundational axioms.

And today, we better understand how public higher education can be the one true path to upward mobility, the one authentic antidote to racism and discrimination, and the one clear-cut catalyst for the change we seek. Moving forward, we at Cal State Fullerton commit to be that path, that antidote, and that catalyst with even clearer conviction and even greater advocacy.

We look forward to using this rebirth year to build an even brighter future with and for Orange County—now, and for at least another 65 years to come.

Editor’s Note: In January 2018, Framroze “Fram” Virjee became president of CSUF, the most populated university—with 41,000+ students—in the largest system of higher education in the country. Virjee, who oversees a $500 million operating budget and more than 4,000 educators, is a member of the Business Journal’s OC50 list of the most influential executives shaping the future of Orange County.


For digital licensing requests for this article, Contact Kim Lopez