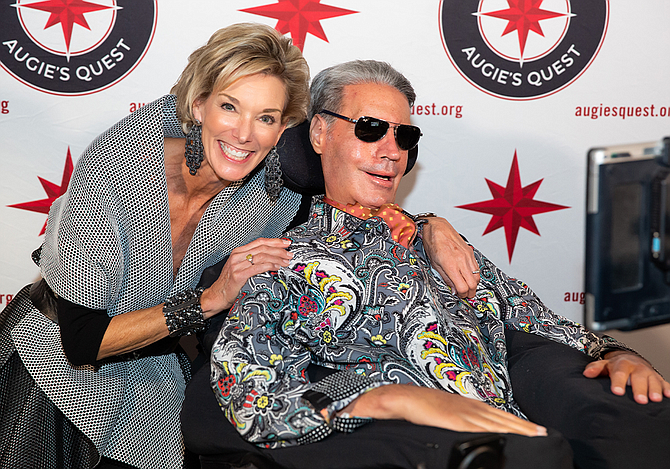 Anelixis Therapeutics LLC, a Boston-based biotech developing a drug candidate for ALS that Nieto played a major role in getting off the ground, was acquired by Irvine-based Novus Therapeutics Inc. (Nasdaq: NVUS) on Sept. 14.

The antibody has the ability to block an interaction between immune cells in the body that has been associated with delaying disease progression of ALS and other medical conditions.

“Our success in raising this amount of money is [because] our drug has shown to be an effective treatment for Type 1 diabetes and lupus,” Nieto wrote in an email to the Business Journal.

ALS, a muscle-wasting condition, is an orphan disease with a small population; about 35,000 cases are diagnosed annually in the U.S.

When combined with potential treatments for other patients, including those with diabetes and autoimmune diseases such as lupus, the addressable patient population for AT-1501 at least triples in size.

“I don’t believe that we would be able to raise this amount of money without the other diseases,” Nieto said. Now, “Novus has the opportunity to address a larger market.”

Nieto, a fitness industry icon who founded and ran Life Fitness from 1977 to 2000 and returned as an investor and board member to the Rosemont, Ill.-based firm last year, was diagnosed with ALS in 2005.

He and his wife, Lynne, launched Augie’s Quest, which since then has raised more than $160 million to fund research to find a cure for ALS.

At the same time, Augie joined Boston-based the ALS Therapy Development Institute (ALSTDI), where he continues to serve as board chairman.

“He committed to spending his resources, his network, his personal relationships to fund basic research in ALS to try to develop drugs and a cure.”

ALSTDI ramped up its capabilities and staff around 2006 and began screening drugs for the purpose of identifying and developing an ALS treatment.

Drug development was an unusual move for a nonprofit institute with no university involvement or overhead fees, which has yielded a promising path forward, Augie noted.

“It slowed down increased progression; it improved survival, motor function and it was really the first drug up to that point that accomplished all those things.”

After taking the discovery to Augie and the board and discussing how to proceed, “creatively, we decided to spin Anelixis out of ALSTDI,” Perrin said.

Since its founding in 2014, Anelixis has worked to create a safer, human version of AT-1501.

Anelixis completed Phase I trials at the end of last year.

While Anelixis considered how to finance its Phase II clinical activities, Novus was searching for a new direction.

The clinical-stage drug developer, formerly known as Tokai Pharmaceuticals, earlier this year received results for its ear infection drug candidate that did not meet its desired goals, and started exploring future opportunities.

“Yesterday, we were pleased to announce the conclusion of that process with the acquisition of Anelixis,” Keith Katkin, who has served as chairman of Novus since a reverse merger in 2017 that brought the company from Massachusetts to Irvine, said on a conference call on Sept. 15.

Katkin previously served as CEO of Aliso Viejo-based Avanir Pharmaceuticals Inc., where he led its $3.5 billion sale to Otsuka Pharmaceutical Co. in 2016, and was the founding CEO of Urovant Sciences Ltd. (Nasdaq: UROV) in Irvine.

“We believe the acquisition of Anelixis represents the highest potential value creation opportunity for our shareholders and creates the most promising path for Novus’ future,” Katkin said.

He succeeds Gregory Flescher, who resigned at the start of the month.

Gros, who counts positions including chief strategy officer for Sanofi and chief executive for Boston-based Imbria Pharmaceuticals on his résumé, found Anelixis through a connection to San Francisco-based BVF Partners.

BVF Partners, formerly known as Biotechnology Value Fund, had invested $14 million in Anelixis prior to its acquisition because of its interest in AT-1501 for the treatment of transplant patients with diabetes.

It served as the lead investor for Novus’ $108 million private investment in public equity, or PIPE deal.

Fidelity led a $135 million financing round for Orange-based Alignment Healthcare, a provider of Medicare Advantage insurance plans, earlier this year.

Novus, which has nearly 20 employees between its Irvine headquarters and office in Boston, plans to use proceeds from the $108 million transaction to finance Phase II trials.

The company’s shares are lightly traded; its market cap has been under $20 million for much of the year.

It aims to kick off Phase II trials for ALS before the end of the year.

Novus hasn’t announced what it plans to do with its ear infection candidate, though Gros said Anelixis’ therapeutic will serve as “the cornerstone of its pipeline.”

“We’re thrilled to be based in Southern California,” Gros said. “It’s a wonderful place to have a biotech company and we look forward to further development and the next phase of our evolution.”