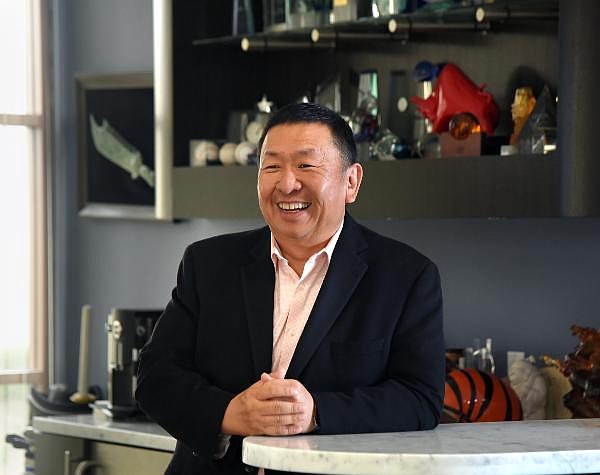 Eighteen years is usually the leap into adulthood, and that description is about right for Vizio Inc. The Irvine firm is growing up as it undergoes a transformation from that of the largest flat-screen TV maker based in the U.S. to a full-fledged media company.

The change is taking place as Vizio comes off an active past few weeks, with Black Friday-level TV sales from stuck-at-home consumers and remote office workers during the pandemic.

It’s also made a series of new hires of late, aimed at bolstering its expertise in marketing and media.

A New York office in the Empire State Building will place the firm closer to Madison Avenue and the advertisers there—once it opens; it was delayed due to the pandemic.

Vizio is looking to reinvent itself in the eyes of potential corporate partners, said Chief Executive William Wang.

“It’s our goal to make sure we cover not just TVs, but we also help TV content makers, to get their quality content into people’s homes … we’re helping them by using our SmartCast [TVs] as a distribution system.

“So we need to understand media better,” said Wang, explaining the new outpost in New York.

Consumers who buy a Vizio SmartCast-enabled TV also have access to the company’s WatchFree app, unlocking more than 150 channels for free, upon which Vizio then sells advertising.

The idea behind the shift in focus is that Vizio has the experience in making TVs, and it’s also got the brand recognition.

It’s No. 2 in the U.S. after Samsung for sales of flat-panel TVs. But Wang and team aren’t stopping there. The TVs are now viewed as a device that can be leveraged and pivoted into other business revenue streams for Vizio, recasting it as something more than just an electronics product company.

The TVs can be used by advertisers looking to penetrate audiences in more targeted ways, something traditional broadcast advertising doesn’t necessarily afford.

It is a similar strategy to that of Facebook or Hulu, which gather information such as who is watching, where they’re watching and when—all information that aids in serving more relevant advertisements.

“So when you watch ‘60 Minutes’ on an antenna or cable, you see the same broadcast all the time. You see the same advertising,” Wang said, pointing to an ad for arthritis by way of example that might show in-between segments.

“I’m not a target. I have no arthritis. However, because they think people watching ‘60 Minutes’ are a little bit older, therefore, they’re going to show their ad to you.

“But I’m a golfer,” said Wang, a member of Shady Canyon Golf Club in Irvine. “I would watch a 30-second golf commercial.”

There’s also the younger generation, such as Wang’s own daughter, that’s not even sitting in front of a traditional broadcast channel waiting for a particular show to air.

These types of challenges are where the consortium Project OAR (Open Addressable Ready) comes into play. The group was formed two years ago with the goal of leveraging smart TVs to work with networks, and counts a 13-member steering committee that includes Wang, along with executives from Vizio’s Inscape, NBCUniversal, WarnerMedia, FreeWheel, CBS and Discovery Inc. It’s also a means for Vizio to innovate and provide value to a new set of customers.

“As a marketer myself, I would love to market towards people who potentially will buy a TV versus somebody who has no interest whatsoever,” Wang said.

“I don’t want to spend money like a shotgun [approach] anymore. The internet gives you the ability to do that.”

Vizio doesn’t know “who” is watching, “as we don’t know who is front of the TV,” Wang said. “But we know which TV is watching, and what this TV played before.” Actual content creation is not the focus for the company, Wang said, pointing out that Vizio’s fixed on being the best platform for the marketers and content makers.

“We’re not really here to compete with them,” he said.

Internally, the Vizio team has been bolstered to address its longer-term aspirations. The most recent addition to the Vizio board in John Burbank comes into play with the former president of strategy and corporate development at Nielsen Co. bringing expertise in media and data to the table.

Burbank noted in a statement upon joining the board: the company is “well positioned” to offer “entertainment and lifestyle experiences through a smarter integration of technologies.”

Adam Towsend, tapped as Vizio’s new CFO in May, joins after a six-month search to fill the position and also brings a background in advertising and media, most recently having served as executive vice president and CFO for New York-based Showtime Networks Inc.

An over 20-person team focused on advertising was set up nearly a year ago. The New York office, which was supposed to be up and running by now, will also have upward of 20 people. It’s unclear the timing of that office opening, given the uncertainty around the pandemic. Wang said there isn’t even furniture moved into the building yet.

COVID-19 has kept the company focused on other more of-the-moment challenges, not unlike many other companies.

“Our business is doing OK. It’s doing pretty good,” Wang said of the past couple months.

Good is a bit of an understatement.

U.S. demand for Vizio TVs has been up lately—to levels the company typically only sees on Black Friday. The drivers were more people in the U.S. at home watching TV, in addition to more people connecting online with co-workers or business partners on larger screens.

In fact, as consumers began receiving their stimulus checks the week of April 15, Vizio sold 250,000 TVs during that week alone.

U.S. sales activity has run counter to the decline Vizio saw in markets such as China, Korea, Japan and Taiwan where sales slumped on account of the coronavirus.

The real challenge the past two months has been with the supply chain, beginning around the February-March timeframe when reports of the virus began to trickle into U.S. news.

Wang described the situation as a rollercoaster ride and uncertainty still remains, he said, around unemployment and which way the economy goes.

A new line of TVs is expected to launch soon, which Wang described as having enhanced contrast, picture quality, sound and load times.

He’s also excited about how the TV industry will evolve, prompting further investment by Vizio into engineering to take the TV beyond simply a device to play back shows.

“TV is really the center of the living room and, therefore, the center of your house. And we believe TV can do a lot more than just entertaining you. Just like a phone, you look back 15 years ago, and a phone was a phone. Phone was used to communicate. You can talk via voice and you can chat via text and you can do email.

“But it’s not until [the] iPhone was invented, [that] the phone [can] do a lot more things. The phone can tell people where you are. The web can give you information. You can order food.

“I believe TV will eventually go on the same path.”