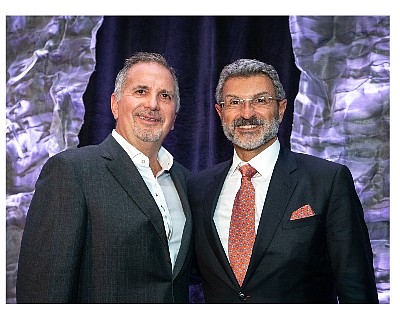 OCTANe, best known for its role as a business accelerator for area technology and life science companies, is getting a new home and well-backed development partner to help with its stated goal of adding some 55,000 high-paying technology jobs to the region by 2030.

Expect to see Orange County’s largest medical and technology accelerator move its headquarters from Aliso Viejo to the FivePoint Gateway in Irvine in the early part of next year, according to Chief Executive Bill Carpou.

What’s more, plans for major collaboration between the group and the office development’s owner, FivePoint Holdings LLC, are in the works, according to Emile Haddad, chairman and chief executive of the Irvine-based master developer (NYSE: FPH).

“We are going to have a [sizeable] partnership with OCTANe,” Haddad said on Sept. 12, speaking to an audience of several hundred attendees at OCTANe’s High Tech Awards, at Balboa Bay Resort in Newport Beach.

“This is not a relocation of OCTANe as much as it is the beginning of a center of gravity for OC that will encompass the [area’s] great attributes beyond just innovation,” he said.

The group had already announced plans to move a portion of its operations from Aliso Viejo to Irvine; that deal was disclosed near the start of the year.

The goal of the latest partnership is to foster a community of forward-looking businesses and industries that will bring a variety of innovations—and, hopefully, thousands of jobs—to the area, similar in respect to markets like Silicon Valley and Austin, Carpou said.

It’s the second notable tenant in recent months for Haddad and his real estate company’s office complex at the Great Park Neighborhoods.

Near the beginning of July, the Irvine-based real estate company teamed up with Duarte’s City of Hope, and announced a planned $1 billion investment in a new cancer center and hospital in Irvine.

It’s the largest and most ambitious healthcare development proposed for Orange County in over a decade.

OCTANe officials believe its operations and members’ businesses will become integrated with the research center, hospital, and cancer hub, which FivePoint and City of Hope intend to have up and running in phases over the next several years.

Haddad previously told the Business Journal that he expects the cancer center to be a galvanizing hub for commercial development at Great Park Neighborhoods, as well as the larger community, with healthcare and medical businesses expected to be at the forefront.

The OCTANe move could add to that medical and lifesciences push, while also bringing new tech firms to the area.

OCTANe portfolio companies raised $307 million in the first half of the year. Last month, the Business Journal reported that it kicked off a new, related venture called Octane Enterprise Solutions, that’s designed to provide early-stage and mid-stage companies access to strategic and institutional capital, as well as connections to family offices looking to invest in innovation-focused companies, and a private investor network.

The City of Hope and OCTANe deals are part of Haddad’s vision of setting up the infrastructure for the next generation of OC’s development, one which will see more young workers, tech companies and high-paying jobs drawn to the area. He said that he sees the groups more as partners than tenants of his company’s office campus.

“For people who hear me talk, [they] know that I am on a mission,” Haddad—a board member of OCTANe—said at the event.

“We can’t tell them to come over here, [saying] it’s a cool place. We have to show them,” Haddad said about people gravitating from L.A. and San Diego to the area.

“Today, if I were to make a pitch to a CEO of a new company, I [now] have the ability to check every box and be head and shoulders above every other city.

“I am also very concerned [with] the problem with areas and companies that start feeling good about themselves. That leads to obsolescence, and 20 years from now, I am concerned that we will become obsolete if we don’t create an ecosystem that draws people here,” Haddad said.

That’s why “we decided to start building a place to create collaboration” Haddad said. “You’re going to get housing, public education” and other life services built into the ecosystem being developed at the Irvine campus.

“With OCTANe, City of Hope, the entertainment aspect, our new innovation center, and the entire vision of Emile—a city is being built there,” Carpou said of Great Park Neighborhoods.

Haddad said that this business cluster “takes an idea and turns it into a practical application and keeps [people and companies] coming here.”