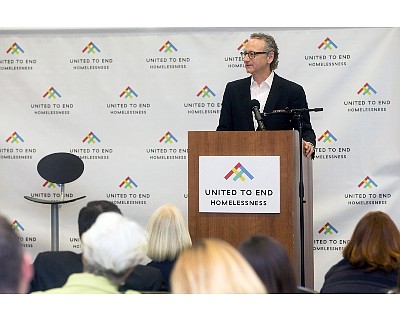 Like many in Orange County, Larry Armstrong a few years ago began noticing the hundreds of tents, makeshift shelters and piles of trash rising on the outskirts of Angel Stadium and along the Santa Ana River near the Honda Center.

As it became clear several hundred people were living there, the chief executive of Ware Malcomb, Orange County’s third-largest architectural firm, decided to do something.

He met with executives at Orange County United Way, the start of a partnership that led to the unveiling of the United to End Homelessness initiative with Armstrong as chairman.

“The idea was to try to understand all the work going on to combat the homeless situation; identify the gaps and what wasn’t being done; and what could be improved by involving the business community and others,” he said.

Thus, began one example of how OC executives, particularly those with ties to the real estate sector, are helping community and religious leaders tackle homelessness by building shelters, providing apartments and raising cash.

Karl Kreutziger, president of construction firm C.W. Driver, turned his attention to short-term housing shortages as a board member with HomeAid Orange County.

“It’s been a passion of mine for the last few years,” he said. “It’s personal, but it also drives the organization forward [and] creates the close, tight internal community of our people wanting to help each other.”

One project Kreutziger is particularly proud of is the Family CareCenter in Orange.

“We helped build [it] about two years ago to get families off the streets.”

C.W. Driver was building captain on the project and donated part of the labor. It signed on its subcontractors, asking them to donate hours and resources.

“We were able to get about 30% of the hours donated,” he said. “The building cost about $1 million as opposed to the $1.5 million it would have taken otherwise.”

Kreutziger said about 90% of families that stay in the center get support and resources they need to “move on” and “take the next step” to find housing and not return to the streets.

C.W. Driver’s next project: The city of Santa Ana on Nov. 19 approved replacing a temporary depot with a permanent 425-bed shelter that includes showers, a cafeteria, mental healthcare services and career assistance programs.

“It’s all about what we do to help people,” Kreutziger said.

A United to End Homelessness study with Irvine’s Jamboree Housing Corp., identified spending patterns across cities and nonprofits. That led to a public awareness push to squash misperceptions about the homeless and encourage people to become “housing champions” and advocate for support in their own areas.

“People found themselves out of a home,” said Churm, United Way board chairman. “[They’re] our neighbors. They were born here. They held jobs here.”

Charles Antis, chief executive of Antis Roofing & Waterproofing, is on the United to End Homelessness board and promotes the campaign with big posters during Anaheim Ducks games; his company also helps Habitat for Humanity build homes.

Awareness and action can be harder on homeless issues than, say, child-focused charity, he said.

“It’s unimaginable to neglect sick children, so in a way it’s easy messaging,” said Antis, who is on the board at Orange County Ronald McDonald House. “It’s not that easy to message on homelessness.”

After awareness and support, United Way works with apartment owners to offer units to the homeless.

Ernie Schroeder of Schroeder Management Co. and a United Way board member has been involved with housing and urban development for nearly 30 years and was the first to offer 10 units as part of the new landlord incentive program, also known as Welcome Home OC.

“People on the street … it’s heartbreaking,” he said. “Whatever we can do to help, we’re doing.”

He said apartment owners can be reluctant to house the homeless so United Way crafted an effort they could accept.

“We created incentives for owners that would help them get good residents and guaranteed rent,” he said.

Schroeder said the program has had excellent results so far.

“It’s going great. The assistance we receive from case workers is fantastic.”

That’s about half of the 60 or so in the program; 80 people aren’t homeless anymore.

Another participating landlord is FDC Management Inc., an Anaheim-based apartment owner of about 4,000 units in California. It put seven Garden Grove units into Welcome Home OC and plans to add three in Fountain Valley this month.

“There is a difference between participating in this program and simply throwing open your doors to anyone with a Section 8 voucher,” he said, referring to a federal program that helps pay people’s rent.

It costs $40,000 to $100,000 a year to cover services a person living on the street needs—whether an ER visit or an overnight jail stay, Kreutziger said.

Providers like United Way and HomeAid offer stable shelter and services for half that amount; Welcome Home OC program costs as little as $17,000 to house one homeless person for a year.

“It makes sense,” Churm said. “With a long-term place to live, to stabilize that person’s situation, that can make a dramatic difference.”