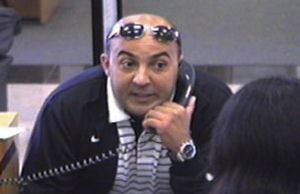 A convicted bank robber has been arrested on suspicion of being behind a bank and identity fraud case involving Donald Bren that made national headlines last month.

The U.S. Attorney’s Office in Los Angeles alleges Moundir Kamil, who was dubbed the “Give Me More Bandit” for his part in a series of 2003 bank robberies, stole the identity of Bren as well as a $1.4 million federal tax refund check made out to the billionaire earlier this year.

Bren, owner and chairman of Newport Beach-based Irvine Company, is the county’s wealthiest resident at an estimated $12 billion.

Kamil is alleged to have set up a series of bank accounts under Bren’s name at the Cerritos branch of Pasadena-based East West Bank, according to a complaint filed in federal court in Los Angeles.

He’s charged with depositing Bren’s check and withdrawing nearly $1.1 million before authorities learned of the scheme.

Kamil was arraigned earlier this month in Los Angeles and charged with felony bank fraud. Bail was set at $50,000, according to court records.

The Business Journal broke the story of the crime in early August.

News of the bizarre theft went on to get national exposure as questions arose about how a 40-something suspect—who listed his occupation merely as “smoke shop” operator and looks nothing like the 78-year-old Bren—could make off with the identity and money of OC’s most prominent businessman.

The refund check Kamil allegedly stole was the result of overpayment of estimated quarterly taxes by Bren.

When and how the suspect managed to get the check wasn’t stated in the initial complaint, nor is it mentioned in the government’s updated charges for Kamil, which were filed on Sept. 13.

The U.S. Attorney’s Office in Los Angeles could not elaborate on the case.

There’s no known connection between Bren and the suspect.

At the time of the complaint, the unknown suspect was referred to as FNU (for first name unknown) and LNU (for last name unknown), “A.K.A. ‘Donald Bren.’”

“Mr. Bren was the victim,” a representative of the Secret Service’s Los Angeles bureau told the Business Journal at the time.

IRS officials and bank fraud investigators also were involved in the case.

While Bren shuns publicity, the media exposure arising from the crime helped authorities in their search for a suspect.

Bank surveillance photos of the suspect first ran in the Business Journal’s story.

They subsequently were shown by a number of other area and national media outlets, including the Los Angeles Times and Orange County Register, as well as in local news shows.

A few days after the news broke, a jail guard in Santa Ana called federal authorities saying he recognized pictures of Kamil “as being his former ward,” Secret Service agents said in a court filing.

Pictures from Kamil’s driver’s license matched the surveillance photos, according to agents. He was arrested and indicted shortly after.

The suspect was born in 1969 and lives in Fountain Valley, according to court records. He counts a history of local bank crimes but never got away with close to the haul he’s alleged to have walked off with in the Bren case.

Kamil was arrested in late 2003 and tied to nine local bank robberies, most of them during a spree occurring that year targeting OC and Los Angeles banks.

A total of $32,634 was reported stolen in the robberies, which included thefts at Bank of America branches in Corona del Mar and elsewhere in Newport Beach and a Wells Fargo in Costa Mesa, among other locations.

Investigators dubbed the bank robber the “Give Me More Bandit.”

Kamil reportedly demanded more money from tellers than he initially got, according to reports at the time of his arrest.

The man threatened tellers with a weapon but never showed one, according to police reports. As in the Bren case, the release of surveillance pictures helped identify Kamil as the suspect in the 2003 robberies, police said at the time.

According to court records, Kamil pled guilty to six counts of bank robbery as part of a 2006 judgment and commitment order. He was sentenced to 30 months of prison time, most of it served prior to the 2006 judgment, and three years of supervised release.

His probation ended in June 2009, according to court records.