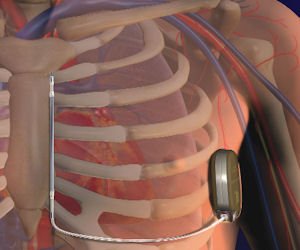 An investment bank earlier this month took the unusual step of highlighting San Clemente’s Cameron Health Inc., a venture capital-backed medical device maker, as a company whose product could change the industry and make it a potential buyout target.

Cameron, which has raised some $85 million in funding, makes a defibrillator that’s implanted under the skin and provides an electric shock to interrupt a potentially fatal heart rhythm during a heart attack.

The device differs from others in that it operates without electrical lead wires within a patient’s veins. Instead, it directly links to the heart, lessening the risk of fractures and scar tissue buildup.

Problems with electrical lead wires have led to complications, regulatory recalls and bad publicity—something analysts contend have blemished the sector’s growth and progress.

Cameron’s technology was highlighted by Boston-based Leerink Swann LLC on a conference call earlier this month.

Rick Wise, a Leerink analyst who hosted the call, said Cameron’s “unique, differentiated, disruptive technology could have a major impact” on the worldwide heart rhythm management market, which is worth more than $7 billion yearly.

They include Natick, Mass.-based Boston Scientific Corp., a Cameron investor that has the right to buy the company, as well as St. Jude Medical Inc. of St. Paul, Minn., and Minneapolis-based Medtronic Inc.

Larger players “may need to consider developing/gaining access to this technology as it becomes more real,” the invitation to the conference call said.

Cameron has “sort of burst onto the scene,” Chief Executive Kevin Hykes said.

“We’ve really come out of nine years of intense R&D effort, very much in stealth mode in Southern California,” he said.

In 2004, Cameron got an undisclosed investment from Boston Scientific, which also got an exclusive right to buy the company.

Chief Executive Ray Elliott predicted there will be a role for an implantable defibrillator without leads “whether Cameron turns out to be the solution or somebody else.”

Boston Scientific plans to “have a play in that area,” Elliott said.

Cameron is planning for other scenarios if Boston Scientific chooses not to acquire the company, according to Hykes.

Continued venture financing, an initial public offering and discussions with “other strategic parties” are options, he said.

Cameron recently was featured in a New England Journal of Medicine study showing that initial trials of its device in patients were successful.

The company anticipates completing enrollment in a 330-patient domestic clinical trial by the end of the year, Hykes said. It’s targeting the third quarter of 2011 to submit data to the Food and Drug Administration and a possible approval in late 2012.

Cameron received European regulatory approval in July 2009 and is doing a staged launch of its device across Europe, Hykes said.

“It’s an extremely differentiated technology,” Hykes said. “We don’t believe there are any fast followers within four to five years of our device.”

Cameron believes its devices could be used in some 40% of patients who need implantable defibrillators.

“That’s in the neighborhood of a $2 billion piece of the pie,” Hykes said.