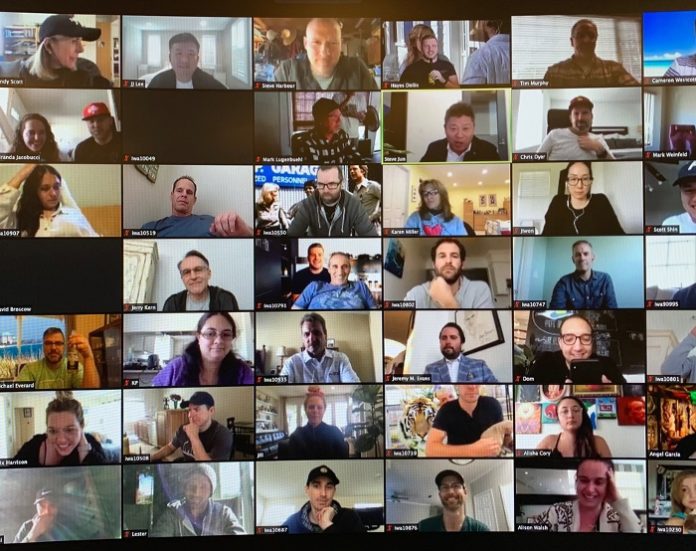 Actor John Krasinski tweeted he thought he was maybe out of a job when some high school kids reenacted the Hyundai “Smaht Pahk” commercial he starred in earlier this year. Members of ’80s boy band New Kids on the Block did a read-aloud, reenacting the same spot on the radio and the #smahtpahk hashtag got some major social media mileage.

This is what happens when an advertisement becomes part of pop culture. And it’s what every advertising agency hopes for their client.

“That phrase [‘Smaht Pahk’] it’s infectious and we want people to at least like it, but for them to go to the trouble of reenacting it, then you know you’ve got something special,” said Innocean USA Executive Creative Director Barney Goldberg.

For Huntington Beach-based Innocean—Orange County’s largest ad agency with 2019 revenue of $328 million—the Super Bowl LIV ad for Hyundai Motor America Inc. nailed it. Automotive accounts are generally among the glamorous, brass ring wins agencies work up to. In Innocean’s case, that’s been its bread and butter, born initially as the in-house agency for the Hyundai-Kia automotive group—the agency’s parent Innocean Worldwide Inc., which is publicly traded in South Korea—before standing up on its own.

Now the 10-year-old agency is turning its attention beyond automotive to diversify its client portfolio, bolstered by a fresh wave of wins last year—Wienerschnitzel, Habit Burger, TaylorMade, UC Davis Health—with hopes it can continue that momentum.

Of course, the disruption of the COVID-19 pandemic has forced the creatives to come up with some creative solutions. Much of the agency and its clients are now working from home, with Innocean having recently conducted its first virtual town hall and happy hour.

“Like all business across the globe, Innocean USA has had to adjust our strategies—for our clients, as well as for our employees,” said Chief Executive and President Steve Jun. “While we now work remotely, our clients face a new set of business challenges caused by this global pandemic.”

The CEO pointed to canceled or suspended campaigns. In some cases, brand new creative work had to be done quickly, as was the case with Fountain Valley-based Hyundai Motor America launch of the Hyundai Assurance Job Loss Protection program.

Still, once a sense of normalcy resumes, the goal remains to grow the non-automotive work.

“There’s no golden ratio or anything like that,” Jun said of what the growth target is. “But let’s say 50/50 [automotive/other accounts] would be a very ambitious plan for now, I think.

“I’d like 1% automotive. That would mean we grew so much,” added Chief Operating Officer Tim Murphy, eliciting laughter as he sat in the agency’s conference room just off of Pacific Coast Highway on 5th Street. “But that’s not realistic. So what Steve just answered would be ideal, to get it more in line somehow.”

Automotive still accounts for more than 50%—that’s as much as Jun would say on the matter—of the company’s overall revenue.

The agency, in January, brought on Murphy as COO. He was most recently president and partner at Siltanen & Partners Advertising.

“We had to get our house in order on the anchor accounts, the automotive accounts,” Murphy said. “Those are very, very important clients. Make sure their needs are being met and then we can start to look outside that area, so last year was a good time to start.”

The agency is keeping its options open to the clients it’ll take on.

Jun described the strategy best when he said the agency’s client roster should mirror the makeup of the business landscape it operates in.

“Advertising industry is a [business-to-business],” Jun said. “You see the entire economy and a certain portion is automotive, telecommunications and other industries. We want to represent that and that’s why we want to increase the other businesses to support all these brands and not just specialize in one sector, like automobile. Being nimble and being diversified, I think we can attract more talent. We can be a better agency.”

Innocean counts more than 400 employees across seven offices around the country. Jun is also responsible for Canada, Mexico and Brazil, meaning Innocean’s ability to service clients at the local level within the Americas is broad.

OC companies can be serviced out of Huntington Beach, while offices in Toronto or New Jersey can service a client like LG Electrics’ high-end Signature Kitchen System Suites.

“[Typically an] agency starts growing from the small account to big accounts,” Jun said. “That is the usual cadence. Automotive accounts are like the cherry on top. But, in our case, we flipped that and we started with the automotive account.”

The upside of that reversal is that Innocean believes it is adept at everything from creative to media buying to experiential, making them attractive as they look for work outside auto.

“A lot of agencies are not investing in their media and creative departments, which are the two main things that Wienerschnitzel needed,” said Wienerschnitzel Chief Marketing Officer Doug Koegeboehn, whose hot dog chain is a new client. “We were really impressed with both the [Innocean] media and the team.”

As with all industries, there are inflection points and swings of the pendulum with changes in client or consumer behavior. From Murphy’s perspective, more recent years for the industry have brought consolidation of resources under one roof.

“Things shift at certain points and at one point ad agencies were full service everything and maybe 20 years or so ago they started to split off media or they split off creative and these large holding companies were, I think, to blame for it and I don’t think it was in the best interest of the client,” Murphy said.

“They would say ‘Oh, we’ve got everything for you. You just have to go to Germany for this and New York for this and Miami for that.’ Clients finally started to realize that’s complicated. It’s expensive. Those groups aren’t necessarily speaking with each other. So [the industry has] gotten in the best interest of the client … We’re all rowing in the same direction, which is really nice.”

What hasn’t changed, Goldberg said, is the creative.

And so back on the Super Bowl—the Oscars for marketers—it would seem Super Bowl 2021 is a ways away. But it’s hardly break time as the team now turns to what the needs of the client will be next year, tasked with not only being creative but also delivering in a competitive environment that’s impacted by external factors, not the least of which is the economy.

“The one question I always [hear] from our clients Day 1 in this industry even before [the iPhone] was first created, ‘If I spend $100, how many shirts can I sell?’” Jun said. “There’s definitely no way to answer that question because it’s about your product. It’s about your service. But, nowadays, at least we know where you’re going with this location-based device. There’s a lot of data available. I think that’s the direction this industry’s already going.

“I still don’t know whether I can answer that question or not,” Jun said. “But we’re getting very close to that answer.”