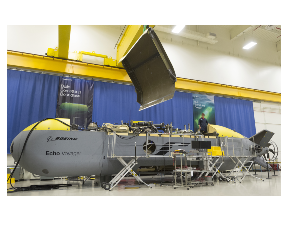 The 51-foot Echo Voyager can operate autonomously for months through a hybrid rechargeable power system and payload bay, and can be launched and recovered without support ships.

The 50-ton vehicle can travel at a maximum speed of eight knots and submerge 11,000 feet under the surface, or roughly two miles.

The vessel is the latest innovation in Boeing’s UUV models, which include the 32-foot Echo Seeker and the 18-foot Echo Ranger.

The vehicle was developed by the company’s Defense, Space & Security unit, which is headquartered in St. Louis and generates $30 billion in revenue annually and employs 50,000 workers.

Chicago-based Boeing is the county’s fifth largest employer with 6,470 employees through October, according to Business Journal research.