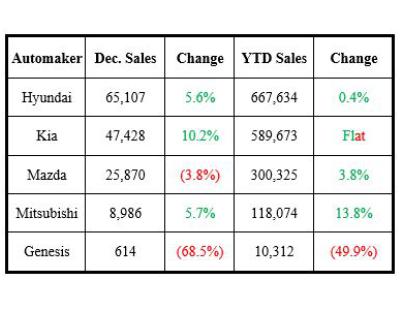 Three of five OC automakers posted a strong month to close a generally down 2018 for local manufacturers.

Hyundai, Kia, and Mitsubishi numbers topped 5% in December but Hyundai and Kia were essentially even for the year, Genesis dropped significantly, and Mazda and Mitsubishi grew.

Hyundai Motor America in Fountain Valley sold more than 65,000 units in December, up 5.6%, including its highest SUV total ever: more than 35,000 units sold, a 42% bump. Hyundai added several such models in 2018 and sold its first Nexo fuel cell SUV last month. Year-to-date sales overall inched up 0.4% at about 668,000 units.

Kia Motors America in Irvine sold more than 47,000 vehicles for the month, up 10%. The automaker ended the year flat—five cars more—selling some 590,000 units. Its top-selling model was the Sorento, a mid-size SUV.

Mazda North American Operations reported a monthly decline of 3.8%, selling about 26,000 units, while year-to-date sales of about 300,000 grew 3.8%. The Irvine-based company ended 2018 with the launch of an all-new Mazda3 at the Los Angeles Auto Show, breaking ground on an Alabama plant shared with Toyota, and debuting its “Feel Alive” marketing campaign.

Sales increased 5.7% in December to about 9,000 units for Mitsubishi Motors North America, making it the best December sales month since 2007. The Cypress-based company reported year-to-date sales of about 118,000, up about 14% for the year—the sixth consecutive year-over-year sales increase for the brand and second consecutive year of sales over 100,000 units.

Fountain Valley-based luxury carmaker Genesis reported a decline of about 69% to 614 units for the month. Year-to-date sales fell by 50% to about 10,000.