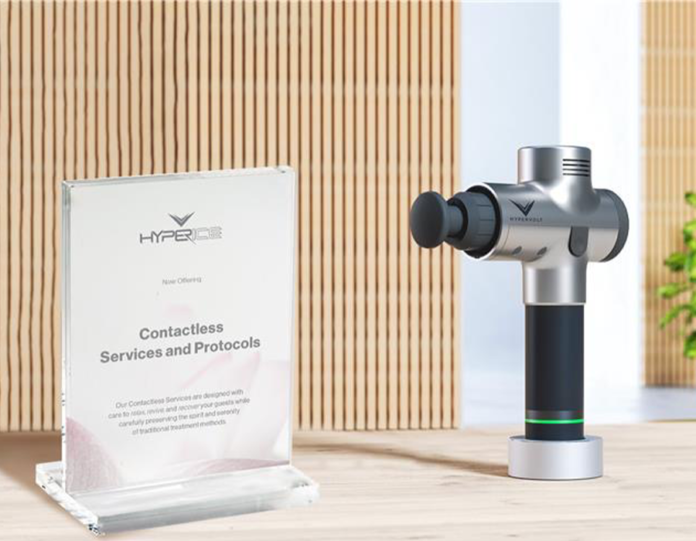 Irvine-based Hyperice Inc., which makes sports recovery tools for athletes and weekend warriors alike, said Four Seasons Hotels and Resorts will be using its massage products at several of its spas.

The company’s products are being pitched as a safer way to conduct spa and massage treatments amid COVID-19, as treatments using Hyperice don’t require contact between customers and massage practitioners.

The hotel chain said it will be using Hyperice’s Hypervolt percussion massage device, its NormaTec Pulse Pro 2.0 Leg Recovery compression system and Venom heat vibration wrap at a handful of its spas.

The Hypervolt is a handheld massage gun with a blunt end that delivers compression shocks to muscle, while the NormaTec Pulse looks like a sleeping bag for your legs.

The Four Seasons is the first big hotel chain reported to be using Hyperice products in this manner.

“We are delighted that Four Seasons Resorts and Hotels, a globally respected brand representing luxury and innovation, is one of the first adopters of the Contactless Treatment,” Hyperice Chief Executive Jim Huether said in a statement.

“Our spa and hospitality team has been working around the clock to develop innovative services that are safe, relaxing and effective in this environment,” Huether said.

The company was profiled in the March 23 print edition of the Business Journal following the acquisition.

The NormaTec acquisition could eventually help the company double its annual revenue within a few years. The 10-year-old, privately held Hyperice recently moved to larger headquarters in the Spectrum area.

Hyperice said it’s also bringing NormaTec’s “Pulse” series under its umbrella, rebranded as NormaTec by Hyperice, to be included in its “contactless massage” treatments.

Both NormaTec and Hyperice brands developed a steady base of followers, so “we decided we’d be better as one company, as an absolute leader in the category,” Heuther said.

Earlier this year EXOS launched live-streaming, on-demand wellness and recovery classes available to its clients at home. Per the new deal, Hyperice products will now be included as part of the class regimen. It’s also launching a 12-week digital coaching program that utilizes Hyperice products.