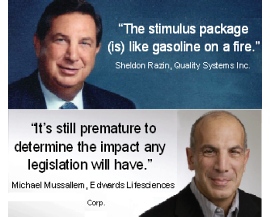 Health insurance—how to provide it and how to pay for it—has dominated the national reform discussion.

But medical device makers are watching the reform debates for other reasons—mainly to predict how it will affect business.

“It is still premature to determine the impact any legislation will have on medical device companies, but soon the squares will become aligned and we will better understand the potential impact,” said Michael Mussallem, chief executive of Irvine-based heart valve maker Edwards Lifesciences Corp. and chairman of AdvaMed, a Washington, D.C.-based trade association.

Some are concerned that potential healthcare reform could push device makers’ sales and profits down, but others see more insured patients as creating demand for medical devices.

“There’s a lot of fear that is (affecting) the revenue side of the business,” said Matthew Hudes, a U.S. biotechnology practice leader for Deloitte Consulting LLP, which has a Costa Mesa office. “There’s a concern that there will be downward pressure on cost.”

But Hudes also said if actual patient volume picked up because of more people with health insurance, “it could be pretty good for the life science (industry).”

Much of the healthcare reform guidelines stress quality and efficiency, which to device makers means new equipment, according to Mussallem.

Mussallem said he and other health industry groups met with President Obama in the spring, “and we agreed on the principles that should drive healthcare cost reform: improved health and quality, continued innovation, streamlined administration and efficient care.”

But that could be a double-edged sword for drug and device makers if doctors take the government’s findings as mandates.

But the device maker lobbyists are quick to point out the difference between drug makers and device makers, to try to gain favor with the legislators.

“Medical devices are designed to fix a health problem, whereas drugs may sometimes only relieve symptoms without addressing the underlying cause,” Mussallem said.

As an example of potential cost savings, Mussallem said Edwards’ less-invasive replacement heart valves could potentially shorten both heart procedure times and hospital length of stays, “which would significantly reduce costs to the system.”

Edwards’ Sapien heart valve, which is sold in Europe, is in a major clinical trial with an eye toward Food and Drug Administration clearance in late 2011.

In the diagnostic device segment, Beckman Coulter Inc., a maker of biomedical testing equipment and supplies, also expects to benefit from reform, according to Chief Executive Scott Garrett.

If healthcare reform results in more people with insurance coverage, Beckman would benefit because its customers would ramp up medical testing, Garrett said. Beckman makes instruments and reagents for a range of medical tests and sells them to hospitals, clinical laboratories and research facilities.

“I think more people having coverage will require more testing,” Garrett said. “Getting them into the healthcare system sooner will likely lead to better and earlier diagnosis and more cost-effective healthcare.”

Healthcare reform likely would require doctors and providers to use more data in caring for their patients, and that data would probably come from clinical laboratories, Garrett said.

“So I think we have a chance to play an even more prominent role in the future in healthcare,” said Garrett, who’s also on AdvaMed’s executive committee.

That view’s echoed by Deloitte’s Hudes. He said he sees diagnostic device makers, such as Beckman, benefiting from healthcare reform because “we’ll see a shift to treating people with chronic conditions rather than only in an emergency room-type situation.” Previously uninsured or underinsured people only visited emergency rooms, where their healthcare costs were covered.

But Hudes said he doesn’t expect healthcare reform to have “a huge impact” on those companies that make devices for treating very sick patients because there’s not a large segment of the population that doesn’t have access to treatment for acute, life-threatening conditions. Very sick people that are either without health insurance or are underinsured, meaning their coverage is not adequate to meet their needs, can access care via emergency rooms.

There are proposals to the healthcare plan that would create a taxpayer-sponsored public healthcare plan. While it has faced opposition, device makers are bracing for what it would do to their payments.

“We don’t know where reimbursement is going to end up, (but) it’s unlikely that it’s going to go up,” Hudes said.

Overall, Hudes said there’s “sort of a chilling effect” on the medical device industry as it awaits resolution of the healthcare reform issue.

In the meantime, device makers and life science companies have looked to control expenses, including cutting back on research and development, Hudes said.

“They need to be prepared for potentially lower prices, but higher volume,” Hudes said.

But Hudes also said he didn’t see “the same level of fear” among the medical device industry about current reform as he had seen in the early 1990s, during an unsuccessful attempt to reform healthcare under former President Clinton’s administration.

“In some ways, it’s going to be refreshing when we get past this and attention can be paid to bringing innovative products to market,” Hudes said.