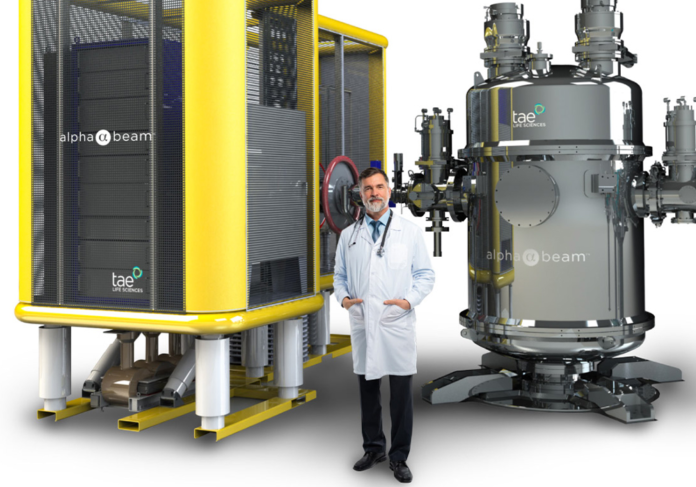 As TAE Technologies Inc. of Foothill Ranch races to solve the world’s energy problems via nuclear fusion, its 3-year-old biologically-targeted radiation therapy offshoot is inching closer to its own world-changing target: treating and curing cancer patients.

TAE Life Sciences LLC recently announced a $30 million investment to support its drug development program, which when combined with its neutron beam accelerator technology could unlock a new generation of targeted cancer therapy.

The Series B initial funding is among the largest in Orange County in the first half of the year.

The amount of funding is indicative of the company’s high expectations, officials tell the Business Journal.

“TAE Technologies doesn’t shy away from some pretty ambitious goals. We have the same culture at our company,” said Bruce Bauer, chief executive of TAE Life Sciences, or TLS.

“We believe we have a technology that is going to change the world of cancer therapy. That’s an ambitious goal and a challenging area, but we have a culture of solving big problems. We’re not shying away from the magnitude of it.”

TLS publicly launched in March 2018 with some $40 million in funding at a $100 million valuation. Its combined $70 million of reported investments to date is a relatively small amount of funding compared to the $700 million its parent company has raised over the past 18 years; TAE Technologies backers have included Google and the late Paul Allen, co-founder of Microsoft Corp.

The PhD-heavy parent company, which is aiming to commercialize its space-age fusion technologies in the next three years or so, is reported to have a $3 billion valuation.

TLS exclusively licensed its parent company’s accelerator technology, built on more than two decades of research that originated at the University of California-Irvine. The parent company’s goals are to provide an abundant source of energy that produces fewer pollutants.

TLS is using that same base of technology for medical applications: it aims to build a neutron delivery system for an emerging type of radiation therapy called Boron Neutron Capture Therapy or BNCT. BNCT is a radiation therapy technique that offers noninvasive treatment options for cancers of the head and neck, brain tumors and other aggressive and recurrent cancers.

TLS’ delivery system, called the AlphaBeam, produces low-energy neutrons that neutralize tumors containing accumulated boron-10, a nontoxic type of isotope that when given to a patient via a drug collects in tumor cells.

The radiation therapy is designed to spare healthy tissue. Because the boron-10 carrier drug is highly targeted to accumulate cancer cells, a patient could in theory be treated in just one or two treatment sessions, without many of the side effects of traditional radiation therapy.

The technology is still in the testing phase.

The company’s first commercial system is currently on its way to a site in China, where its partner Neuboron Medtech Ltd. plans to launch Phase II clinical trials with TLS’ accelerator-based neutron system and a boron-10 target drug called BPA, which has been used to treat about 2,000 patients to date.

In the meantime, TLS is finalizing construction plans with an Italian-based partner, which will kick off clinical trials for CE markings in 2022. U.S. clinical trials will follow with at least three or more clinical sites.

On the drug development side, Bauer said research will continue for several years before clinical trials can begin.

“We’re bringing together everything from particle acceleration technology to pharmaceutical development. It takes time and perseverance, and that’s what we’re bringing to the table.”

TLS announced the $30 million initial close of its Series B round of financing on June 2.

More’s in store. Bauer—whose résumé includes stints in the private equity and medical imaging industries—said TLS ultimately wants to raise $100 million in its Series B round.

San Francisco-based Artis Ventures, which led TLS’ $40 million Series A round in 2018, participated in the deal.

Funds from the latest funding round will support drug development, which takes place at the company’s new R&D facility in Santa Monica. The building was previously occupied by Japan’s Astellas Pharma Inc., which has experience in creating boron compounds for BNCT.

TLS subleased the 16,000-square-foot lab and recruited a core team of researchers from Stella, Bauer said.

The new round of funding will also support growing teams in R&D, manufacturing, quality control, software and systems engineering in Foothill Ranch.

TLS currently has 30 employees, though more than 70 people including contractors and TAE Technologies employees are working on the project, Bauer said.

Amid COVID-19, Bauer said TLS has transitioned to work from home and, he joked, “given everyone a chance to catch up on their paperwork, given the regulatory environment we operate in.”

Joking aside, “we’ve had very productive continuity on the device side and drug development side.”

The biggest challenge for the business has been maintaining its international partnerships amid travel restrictions, which have prevented teams from traveling to sites in Russia and China.

“The good news is we have strong partnerships in these locations and we’ve been relying on local assets to continue our work. It’s slowed us down a bit, but we’re working it out. Our teams will travel when they can.”

Bauer is no stranger to patience and persistence, and he’s keeping his ambitions high.

“OC has a history of companies that have undertaken big challenges in healthcare, and succeeded, and really made an impact.

“We’re going to add our name to that list.”