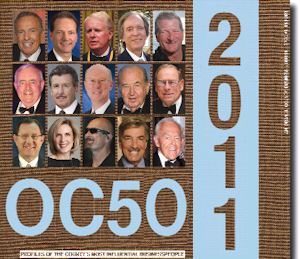 OC 50, the Business Journal’s yearbook of the most influential people here in business and beyond, saw newcomers, departures and shifts for 2011, reflecting the county’s evolving economy.

The section, which starts on page 25, includes key businesspeople plus academics, politicians and others who impact business here.

As always, there are newcomers.

Some debuted with a bang, such as Charles Schreiber and Peter Bren of Irvine-based real estate investor KBS Realty Advisors.

The two broke into the stalwart Real Estate category with several billion dollars worth of headline-making deals, including last year’s $655 million buy of a Chicago skyscraper that was the city’s most expensive per square foot.

Susan McGalla joined as the only woman to lead a major company here.

She took over Foothill Ranch-based clothing retailer Wet Seal Inc. in January and is in the process of moving from the Pittsburgh area to Orange County.

The longtime American Eagle Outfitters executive now heads a retailer with some $565 million in yearly sales and a turnaround in the works.

She takes over from former Wet Seal chief executive Ed Thomas who was an honorable mention in our Apparel category last year.

Other changes were more gradual.

Unlike longtime leader Desai, Biddiscombe isn’t an engineer. He’s a finance guy and ushers in a new era at maturing QLogic.

The handoff is part of an ongoing shift among technology companies away from founders and formative chief executives to a new generation of leaders.

Jannard, who sold Oakley to Italy’s Luxottica Group SPA in 2007, now is looking to change the way movies and TV shows are made with his digital cameras.

Dennis Gilmore and Anand Nallathambi now are stand-alone OC 50ers after appearing side by side in First American Corp.’s 2010 entry.

The two companies emerged last year in a breakup of First American Corp.

In Government & Institutions, philanthropist and University of California, Irvine, benefactor Paul Merage marked his first year in the main section of OC 50.

Merage, inventor of Hot Pockets, made the group based on his extensive giving and growing investments in stocks, companies and real estate.

OC 50 saw departures as well as shifts from the main group to a secondary category we call “other members.”

Perhaps the most notable exit was that of Scott Garrett, former chief executive of Brea-based Beckman Coulter Inc., a maker of machines and chemicals for medical testing and research.

Garrett served as Beckman’s chief executive from 2005 until September, when he stepped down in the wake of a recall of a profitable heart disease test.

Beckman is in the process of being bought for $6.8 billion by Washington, D.C.-based conglomerate Danaher Corp.

Several others shifted from the main group last year to our other members category this year:

• Government’s Larry Agran of the city of Irvine.

• Government’s Loretta Sanchez, a congresswoman representing Santa Ana and other parts of the county.

The other members section, which often sees people graduate to the main group, includes several newcomers.

All of our selections admittedly are subjective. But this year’s group includes all the names you’d expect.

There actually are 63 OC 50 members this year, including joint entries. There are 52 other members.

Members are selected and screened in a variety of ways: company size, community involvement, political activity and significance within their own industry.

A note on the writing style of OC 50: It’s done in what’s called telegraph style.

The sentences are choppy and truncated, with most articles and some verbs dropped. With 50 entries, the goal is to provide quick-yet-detailed looks at the most influential here.