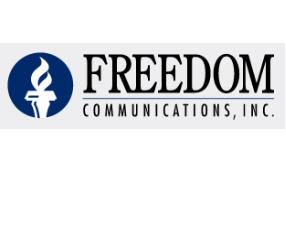 Digital First Media’s $45.5 million offer has been selected as the stalking horse, or starting, bid for Wednesday’s bankruptcy auction of Freedom Communications Inc. in Santa Ana.

The Denver-based parent of Los Angeles News Group, which publishes the Long Beach Press-Telegram and the Los Angeles Daily News, among other dailies in Southern California, will go up against two other confirmed bidders—an investment group led by Freedom Chief Executive Richard Mirman, and Chicago-based Tribune Publishing Co., owner of the Los Angeles Times and San Diego Union-Tribune.

The publisher of Orange County Register and the Press-Enterprise in Riverside, which filed for Chapter 11 bankruptcy on Nov. 1, has “$51.2 million of allegedly secured debt, and $47 million in unsecured debt,” as well as a “$155 million contingent claim of Pension Benefit Guaranty Corp.,” Chief Financial Officer Chris Dahl said in an affidavit filed with the U.S. Bankruptcy Court’s Central District of California.

Digital First is bidding on Freedom’s assets only and won’t take on Freedom’s pension obligation, according to Ron Hasse, publisher of Los Angeles News Group.

Pension Benefit Guaranty Corp. would take over the plan as trustee and use its own assets and any remaining assets in the plan “to make sure that current and future retirees of the plan receive their pension benefits”of up to about $60,000 per year each—if the bankruptcy court determines that Freedom can’t reorganize with the plan intact and approves the plan termination.

Missed contributions to the retirement plan totaled about $15.5 million as of September and are a part of Freedom’s secured debt. The plan in December had about 5,300 participants and $287.3 million in assets, according to the U.S. Department of Labor.

Tribune and Mirman’s group didn’t disclose details about their offers. The auction wouldn’t be held if there is no “conforming Initial Overbid,” according to court documents, and the stalking horse bidder would then be named the successful bidder.

Digital First submitted a refundable deposit “equal to 10% of the cash component of the competing purchase price,” or $4.5 million. It’s also entitled to a break-up fee and expense reimbursement of at least $250,000.

Mirman’s group includes Freedom Chairman Eric Spitz and real estate developer Mike Harrah “as the principal investor,” Mirman said in a Friday letter to employees. “We are honored to have Mike as part of the team as we work toward preserving local ownership of The Orange County Register and The Press-Enterprise. Mike, Eric and I remain confident in the prospect of winning the auction.”

Mirman’s statement put to rest speculations that an insider bid may be in jeopardy. Harrah in a recent interview with the Los Angeles Times said he was concerned about “possible environmental contamination at the Register’s printing plant site in Santa Ana, about the value of assets held by Freedom’s pension plan, and about the profitability of Freedom’s newspapers.”