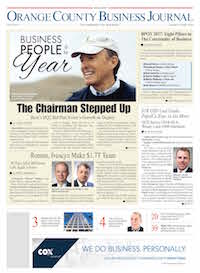 The Business Journal has selected Irvine Company Chairman Donald Bren as its Business Person of the Year.

Bren and seven other BPOYs are featured in the Jan 1, 2018 issue, which drops on Saturday and arrives on Monday.

Bren’s Irvine Company is the largest landowner and developer in Orange County, and among the largest in the U.S. In 2017 the company’s investments performed well in all real-estate sectors: residential and multi-family housing, office, industrial and retail. The Company expanded its footprint in its newer markets of Silicon Valley and San Diego.

But Bren’s selection had much to do with business he may never develop—his bold, public pitch to Jeff Bezos and Amazon to bring the retailers’ HQ2 to Irvine.

238 cities and municipalities made pitches to land HQ2, which could potentially bring some 50,000 new jobs to the winning area.

Irvine isn’t considered a leading candidate to grab the estimated $5 billion project, nor are other OC areas that have also submitted RFPs according to most national reports. Prognosticators give the edge in the Amazon sweepstakes to larger cities on the other side of the country, like Boston, Atlanta or Washington D.C.

But as Mark Mueller writes, “…few bids could make an elevator pitch that matches the one that Bren gave to Bezos.”

Irvine Co.’s “one-click” pitch for HQ2 calls for the e-commerce giant to build its new base in the Spectrum, with the developer financing construction of the buildings for the Seattle-based firm.

Bren was last selected as Business Person of the Year in 2007.