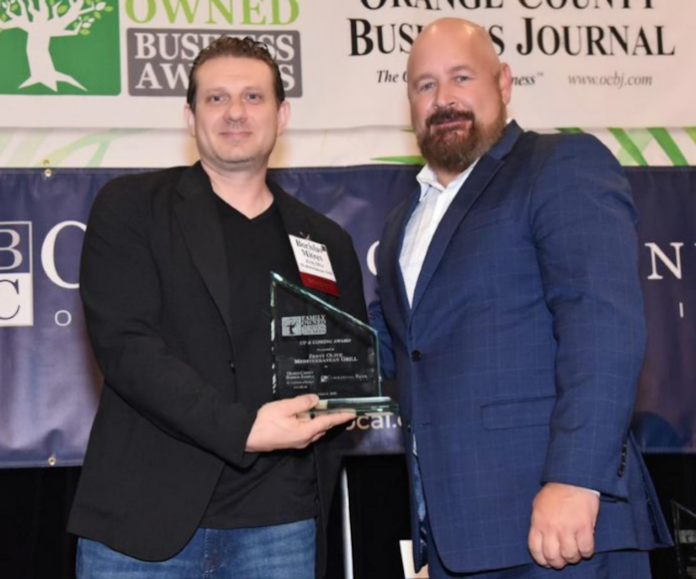 Boris Mitrev and Dessi Sarabosing had not worked together for over 20 years before partnering to create Zesty Olives Mediterranean Grill, one of OC’s newest healthy Mediterranean restaurants.

After growing up together in Bulgaria and working in their parents’ restaurant as children, the brother and sister duo went down their own paths after college—Sarabosing to the U.S. and Mitrev to the U.K.

On a family vacation to California in 2019, Sarabosing showed her brother around Orange County and Mitrev took note of what was missing in the community’s dining scene.

“I realized we could elevate the offerings,” Mitrev told the Business Journal.

They sought out to do just that, opening two restaurants for their Greek-inspired restaurant concept, Zesty Olives Mediterranean Grill, last year in Lake Forest and Irvine.

They now have plans to open nearly 60 more locations over the next five years.

“It was like it was meant to be, a miracle,” Sarabosing said of their partnership.

Zesty Olives was one of five honored at the Business Journal’s 23rd annual Family-Owned Business Awards on June 2 at the Irvine Marriott. The company won in the Up-and-Coming category.

After earning $500,000 in 2021 and anticipating revenue of $3 million in 2022, Sarabosing and Mitrev are prepping for major growth for their family venture.

Sarabosing moved to the U.S. in 2002 where she started a financial career at Ernst & Young and Arbonne International. She later made her way to Orange County as corporate controller of Irvine-based Taco Bell, and in 2014, joined Real Mex Restaurants where she worked her way up to chief financial officer.

She won a Business Journal CFO of the Year award in 2017.

“I learned that the food service industry is not just about meeting customer’s expectations but going beyond what they expect,” Sarabosing said.

Sarabosing was most recently the CFO of Mobilitie Inc. until last July, when the first Zesty Olives opened.
Meanwhile, Mitrev had honed his hospitality skills at London-based BaxterStorey, a European food service provider, working with notable clients like the English National Opera and the Royal London House Club.

Stepping into his entrepreneurial skills, Mitrev joined a gourmet street food enterprise, Grilling Greek, overseeing and scaling operations across London in pop-ups and food trucks. He eventually returned to Bulgaria and launched his own restaurant Souvlaki & Burger Bar in 2019, before joining forces with his sister.

“We made a promise to our customers to make their community a better place, and we deliver through the food we serve and our guest services,” Sarabosing said.

The Mediterranean menu was created as part of the wellness lifestyle Zesty Olives intends to promote. All food options are made fresh daily.

Highlighting colorful ingredients and fresh products, the business will always “invest in quality” when it comes to its menu, which is still developing as the company enters its second year in business.

“We’re always following the needs and habits of the consumer,” he said.

Mitrev’s wife, Yana, manages the Lake Forest location and marketing efforts, while Mitrev splits his time between both spots.

Customers can often find him behind the counter making food, training employees, and taking orders when needed.

“I’m like the captain of the ship, I have to be here and involved,” Mitrev said.

Sarabosing handles the financials and helps oversee operations. Her daughters are involved too, helping with social media and working in the restaurants when not busy with school.

“I want them to learn customer service early on and what it takes to run a successful business from the ground up,” Sarabosing said.

Their mother oversees the desserts and baking menu; it’s her secret recipe they use for the $6.95 baklava.

Just as they learned from their parents, Sarabosing and Mitrev will teach the business to the next generation from cooking and cleaning to serving and management.

“We see this business as a family legacy and want to raise the next generation learning it and being able to carry it on into the future when the time is right,” Sarabosing said.

That perspective extends to its restaurant team as well, with options to train and move up within the restaurant group in the future. They believe future franchisees can be found within their own operations.

The Next Five Years

Deals are in the works for Arizona, Texas, Nevada and potentially Orange County, with a goal of opening nine company locations by 2023.

Mitrev is still adapting to the area and prefers to learn by asking questions.

From neighboring business owners and restaurant operators to the customers at his own tables, Mitrev will ask everyone for feedback.