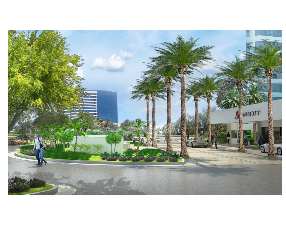 The Irvine Marriott has begun a $1.3 million project to remake its arrival driveway area, the last stage of a $22 million overall project that includes room renovations.

The driveway work, which began last week, will finish in October and the room renovation, which began in June, will conclude in December, according to General Manager Scott McCoy.

“We’re remodeling the entire arrival area and every single guest room,” he said.

The hotel has 493 rooms and suites.

McCoy said the arrival area will have improved circulation for cars and be anchored by a new waterfall that keeps ambient sounds from affecting guest room balconies above the space.

“There are three ponds right now and we have a small fountain that doesn’t do much,” to mask noise, he said.

McCoy said the new hardscape will have better aesthetics and is more “environmentally” friendly.

He said work on the rooms includes new hardwood floors, sliding doors for bathrooms for more clearance, and turning three-fourths of the room inventory into “shower-only” in line with a hospitality trend toward fewer bathtubs.

Rooms also will have keyless entry and 55-inch televisions that allow guests to “use your device on our TV,” to watch movies from Netflix or Hulu accounts, for instance, he said.