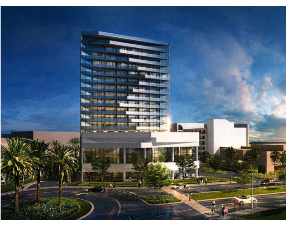 Costa Mesa’s Avenue of the Arts Hotel is set for a 63% expansion in room count following city planning commission approval on Nov. 28 of a new, 15-story tower adjacent to the existing property.

The tower replaces a previously approved 23-story, 100-unit condominium project at the site, which is located next to the Segerstrom Center for the Arts complex.

Two new hotels totaling 1,210 rooms for those sites were approved by Anaheim City Council in July.