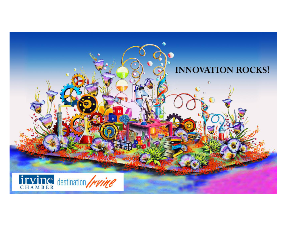 Destination Irvine said it would have a float in the Rose Parade on Jan. 1, 2016.

The float is called “Innovation Rocks!” and fits the parade theme of “Find Your Adventure.”

The group is the city’s destination marketing organization, funded by a self-imposed assessment on hotels and run as part of the Irvine Chamber of Commerce.

The float celebrates “innovations in technology and life sciences” by its companies and schools, said Chamber of Commerce Chief Executive Tallia Hart in a statement.

Destination Irvine said about 82 million people would see the parade in-person or on television.