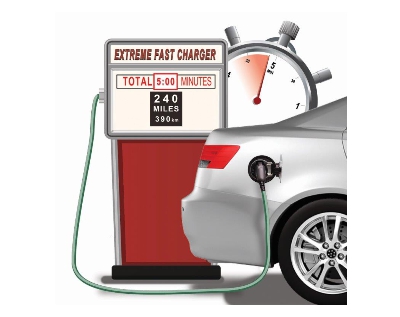 Enevate Corp., an Irvine-based company developing rechargeable batteries for electric vehicles, said the firm’s 14 years of research will pay off handsomely with royalties when more cars use its fast-charging technology.

“We’ve really been focused on providing what we call extremely fast charge, which is about 75% charge in five minutes,” said Jarvis Tou, Enevate executive vice president for marketing and products.

The goal is to make recharging an electric car take about the same amount of time it takes to fill a car tank with gasoline.

The company’s gained the attention of investors, with $111 million raised so far and a workforce of 60 people and plans to add more. Its last reported funding deal was in April, when Bangkok-based energy giant Bangchak Corporation Public Co. made an undisclosed investment in the company. Bangchak has more than 1,000 fueling stations across Thailand.

Enevate attracted extra international attention this month when one of its technical advisers, John Goodenough, was named one of three winners of this year’s Nobel Prize in chemistry. At age 97, he is the oldest person to win a Nobel award; he joined the company’s advisory board in 2010.

Enevate is the only startup that Goodenough works with, Tou said.

Other board advisers include tech heavyweights such as Steve Altman, who was president of Qualcomm Inc.; Yevgen Barsukov, who is head of algorithm development in the battery group at Texas Instruments; and Marc Madou, a University of California-Irvine Chancellor’s Professor who is credited with developing the fundamental ideas for shaping carbon structure and who was recently inducted into the National Academy of Inventors as a fellow.

2016 Pivot
The company was co-founded in 2005 by Madou and Ben Park, who is now Enevate’s chief technology officer and who has a Ph.D. in mechanical and aerospace engineering from UCI.

The company in 2016 made a strategic shift “from consumer electronics, which was basically maturing and leveling out with saturation in the world market, to electric vehicles, where the need for fast charge and the need for higher energy density was very, very high,” Tou said.

“If we can charge an electric car as fast as refueling a gas car, now the drive-through charging stations become possible as long as you can supply enough electricity to the battery,” Tou said. “But the batteries won’t degrade and they can sustain that kind of charge without frying the battery.”

The company aims to license its “extreme fast charge” lithium-ion technology rather than produce the batteries themselves, starting with the 2024-2025 model year cars, Tou said.

Enevate has been gaining “a lot of attention from the automakers” since cars will be able to recharge about 10 times faster than current electric vehicles.

“The numbers for the electric vehicles are just staggering,” Tou told the Business Journal. “We’ll have a very nice revenue stream with that” as early as 2023.

He called the company a “spinout” from the University of California-Irvine research.

The company isn’t connected to UCI as a majority stake is owned by outside investors and a minority share held by employees.

The company has more than 200 patents or patent applications in process, its website said. Its major competitors are StoreDot of Israel and Sila Nanotechnologies of Alameda, Tou said.