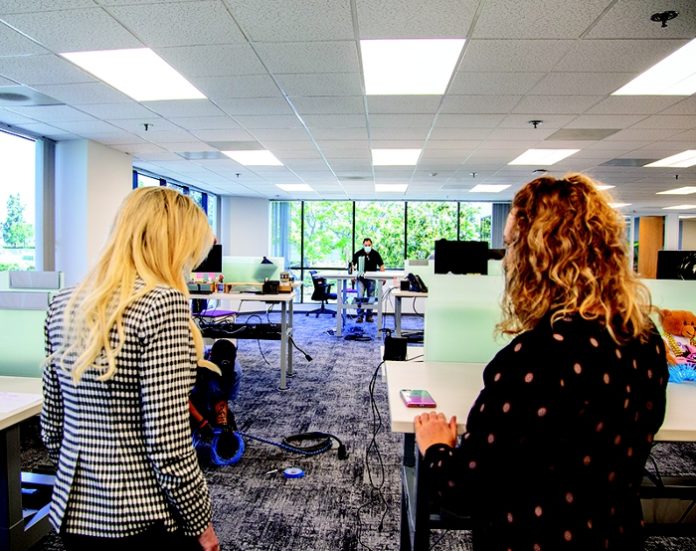 As companies in Orange County prepare to go back to the office, employers are rethinking their space.

Short-term changes made as a result of the coronavirus pandemic will incorporate new county requirements that factor in increased cleaning and social distancing efforts.

Lasting impacts on office space could turn out to be much more pervasive. The good news is that many forward-thinking companies were already heading in that direction pre-pandemic, say some of the area’s top architecture and design firms.

Now, older companies, or at least those with a more traditional mindset, are “rethinking the way they use their space, and interact with employees,” she said.

“This crisis was the push some needed to rethink their operations.”

Lasting changes are largely centered on the newly accepted notion of remote work, which will impact everything from workplace design to internal culture.

While fewer employees in the office could eventually allow for smaller leases, and help companies lower some of their overhead expenses, this isn’t likely in the near term, notes Hendy.

What’s more likely is a reconfiguration of the same areas that will allow for social distancing practices, and increased efforts to convert underutilized areas into small meeting rooms or areas that will encourage employees to return to the office.

“For critical departments and workers who remain in the office or are soon heading back, we’re seeing utilization of the entire, now largely vacant, workplace being used to accommodate physical distancing,” said the San Francisco-based company, which has large operations in Newport Beach.

Many employers are implementing a phased approach in their return to the office. Hendy said she is working with her firm’s existing roster of clients, as well as new ones, to develop a timeline that hinges on three phases.

• In the first phase, about 20% to 30% of staff returns, including leadership and other essential workers.

• The final phase will bring the office to full capacity, “though that will look different than it did prior to the pandemic,” said Anna Grayhek, a workplace strategist at H. Hendy.

“It might only be 80% of employees that return to the office, with a portion of staff continuing to work remotely,” Grayhek said.

“Employers are seeing that some workers prefer working from home, and they are more productive in doing so. It’s a win-win solution, as this creates better staff retention, and frees up space in the office for new opportunities.”

Simple short-term changes could include sanitizing stations, wayfinding signs like the ones seen at the grocery store to direct traffic and promote distancing, and increased spacing of desks.

Longer term, these changes are more reflective of the culture of a company, with the office becoming “a creative hub for employees to connect with each other, [so they will] want to return to the office,” notes Hendy.

In a recent study, Interior Architects of Irvine found that collaborative areas are likely to play a large role in the reconfiguration of spaces in the wake of COVID-19, with social hubs needed to make “a robust workplace culture.”

The study found that the change least expected to occur over the long term is a reduction in space devoted to group amenities. The most expected change was the reassessment of work-from-home policies.

Parke Miller, executive vice president at area landlord Lincoln Property Co., said tenants will “use the impact of this pandemic as an opportunity to reinforce or build their brand and culture as one that is focused on the health and wellbeing of their employees, customers and clients.”

“Perhaps this is reinforced via the acquisition of new high quality and modern office space that will serve to define their character and culture,” says Miller, whose firm has developed several such buildings in the past few years.

“This disruption is really putting employees first,” notes Cheryl Osborn, president of Casco Contractors, which has also found a niche in this new normal.

The Irvine-based construction and design firm now starts its work with clients through a survey, asking employees what they are most concerned about in returning to the office.

“People were more scared to return to the office than I expected, with many wanting to know how they will be protected,” Osborn said.

“Employers need to know that it’s not just about cleaning, it’s about communication, and being forthcoming with your staff about what you’re doing to make the space a safe one.”

The company recently worked with Inari Medical in its return to its Irvine office, making changes that included the rearrangement of workstations, adding plexiglass shields and modernizing break rooms and conference rooms.

Inari, a device maker whose products treat patients suffering from blood clots and other diseases affecting veins, leases about 38,200 square feet near the southern edge of the Great Park Neighborhoods.

The firm, which earlier this year filed plans for a $100 million initial public offering, employs 240 people, an amount that translates to roughly 160 square feet per employee at its headquarters, which includes both office and manufacturing space.

That square footage figure could increase as tenants look to lessen the density in their space to “rebalance the workforce,” according to Kurt Strasmann, executive managing director at CBRE Group Inc.

“In the short-term, everything will be rethought with safety at the forefront,” Strasmann said. “As companies think about reopening their offices, one of the primary areas of focus is on realigning their existing space to achieve social distancing.”

As companies focus on reducing their density, suburban regions such as Orange County could stand to benefit as whole, attracting and retaining firms post-pandemic, Miller notes.

“Companies may look to relocate or expand their footprints in a place like Orange County, which is widely viewed as a market with an excellent business climate, talented people and a super high quality of life, that is not as reliant on density factors like population and mass transit like other markets may be,” Miller said.

“We are looking into Zoom Rooms, or video conferencing pods, as well as making smaller, more private conference rooms for one to three people,” Osborn said.

Changing dynamics could ultimately lead to smaller offices with more efficient designs, with companies looking to do more with less.

“This crisis is forcing people to recognize how they handle business,” Hendy said. “But this could lead to a more efficient workforce and workplace, which will save on costs.”