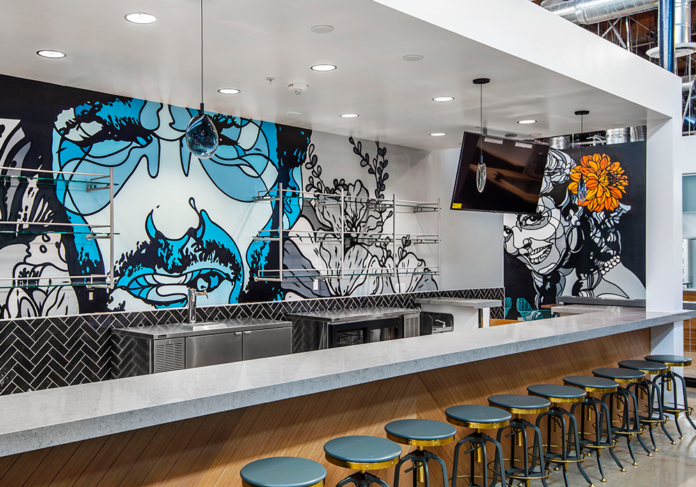 When a developer references Hong Kong night markets and music videos from rapping country star Lil Nas X to describe the aesthetic of its latest retail project, the city of Stanton might not immediately come to mind as the most likely location.

But that’s the home of Frontier Real Estate Investments’ new Rodeo 39 Public Market, which officially came online with a grand opening this past week.

It’s the largest—and among the more eclectic—additions to OC’s retail scene in a few years: nearly 40,000 square feet of indoor and outdoor space at a previously tired plot of land along Beach Boulevard.

Along with more traditional food and retail options that have been added nearby, as well as Brookfield Residential’s Lantana @Beach townhome development next door, it’s the latest sign of revival for the city of some 40,000 people, Orange County’s 25th largest.

A flurry of positive reviews on Yelp, and already heavy traffic at the market—the brewery Bearded Tang sold over 500 beers in just a couple hours, causing a 150-car lineup all the way out to Beach Boulevard when it did a growler release during a soft opening—suggest the public’s ready to embrace the concept.

It’s all good news for Newport Beach-based Frontier and Managing Partner Dan Almquist, especially given the original plans for the property had been far more staid. A typical grocery-anchored center, via an ethnic market or discounter, was the initial plan for a portion of the roughly 10-acre retail site just north of the Garden Grove (22) freeway.

Along with the Lantana housing development next door, Rodeo 39 is part of a 22-acre mixed use project called 22 & Beach.

“I think one of the things we talked a lot about is a project needed to have a soul like when you go somewhere and you feel it. There’s depth to it,” Almquist said.

“Stanton’s really compelling with what’s happening throughout that whole Beach Boulevard corridor. The Vietnamese community is also thriving there. This idea of diversity that’s been obviously talked about the last four, five months, we gravitated toward that two years ago recognizing how diverse OC is and realizing we had an opportunity largely because where the project is geographically.”

Stanton has an Asian population that makes up 27% of the city, 1.4% is Black or African American and 49.2% identifies as Hispanic or Latino, according to U.S. Census Bureau data from last year.

The merchant mix has tried to reflect that diversity, according to Almquist.

Rodeo 39 builds on OC’s history of more directional and experiential retail, such as Shaheen Sadeghi’s The Lab Anti-Mall and Anaheim Packing House, or Scott Burnham and Bryon Ward’s SOCO and OC Mix.

They were certainly references for Almquist, he said.

“More and more, the shift is going to the perimeter of a center with the butcher, the bakery and some of the more artisanal type uses,” he said. “Food and beverage is really driving and continues to drive retail, especially chef-driven food, even in spite of the pandemic. For us, it was more the idea of craft and highlighting that.”

Rodeo 39 is one of two notable retail centers to open in OC amid the pandemic, along with Sadeghi’s 33,000-square-foot Leisuretown concept in the Anaheim Packing District that saw its debut in the summer.

The Stanton project also iterates on the food hall concept, a model where you eat and maybe eat some more before heading home. Rodeo 39 wants its guest to stay a bit longer—hence the reason for creating a retail merchant mix that’s more than food.

“The food hall pure play concept—you have to be really careful. I think in the right setting it works and some people in OC have done it really well,” Almquist said.

“With our projects, Stanton is the first to come online, I think there’s more we can offer to make it a lot more interesting and a lot more sustainable. That’s why we call it a public market. You can come and shop for sunglasses or clothing. We have a tattoo artist and all these entrepreneurs that make for a really interesting dynamic.”

Frontier will try its hand again with the public market concept in San Juan Capistrano at another project in the pipeline, called the River Street Marketplace.

The agrarian-themed project’s about 60,000 square feet, and located next to the city’s historic Los Rios District. It will be broken up into a series of barn-like buildouts visitors can stroll through.

As Frontier focused on how to innovate with its tenant mix, its also kept a watchful eye on the swift adoption of third-party delivery and ghost kitchens accelerated by the pandemic. In fact, Frontier Vice President and Partner Tom Carpenter signed up to be a delivery driver to better understand the process and pain points, to inform how Rodeo 39 could better serve its restaurant tenants, customers and the drivers (see story, this page).

“I think the most important thing for us is understanding that balance between the experience we have here and how do we facilitate that as a landlord, knowing this trend of people shopping and buying food and ordering takeout online is only going to keep growing. So, as a landlord, what can we do?” Carpenter said.

What resulted from the developer’s research and conversations was a program, called Rodeo2Go, that’s been rolled out with the idea that it will mature and be tweaked over time as more feedback comes in.

Rodeo2Go allocates 10 dedicated parking stalls for pick up. There’s also an online portal where customers have access to ordering from all tenants in one spot. Frontier provides the staffing, via a Rodeo Runner, to pick up the food from the restaurants and take it to the customers once they’re parked. Tables at the center also have QR codes that redirect visitors to the Rodeo2Go website for ordering.

“We’ve owned and operated over 20 restaurants ourselves in various forms and factions, so we understand what a P&L looks like for a restaurant operator and some of the issues they’re facing and also where some of the opportunities are,” Almquist said.

Added Carpenter: “We want to learn from our tenants, too. As they open, we’ve told them, if there’s things we can be doing better, we want to know. With COVID there were all these trends that were happening that may have taken five, 10 years, but all of a sudden it’s happening now.”

“The old school way of thinking was the landlord builds the center, leases to the tenant and then the tenant takes it from there. Now, we’re looking at it as a true partnership,” Carpenter said.

When COVID is in the rearview mirror, it leaves projects such as Rodeo 39 presumably well positioned for where retail had already been moving: away from the buildout of more traditional malls and lifestyle centers and away from that old school way of thinking, where its every tenant for itself.

“As the dust settles next year from what we’ve all experienced together with COVID, when you look at retail or when you look at office, I think there’s going to be some massive fundamental changes,” Almquist said.

“A lot of what we’ve done in Stanton at Rodeo 39, it’s really kind of a village within a village. People are looking for something special. They’re looking for something unique. I do think [that for] a lot of people in our industry certain buzzwords get popular and people use the word authenticity or experiential, but when you really step back at what that means, I do think there’s a lot of weight behind it.”