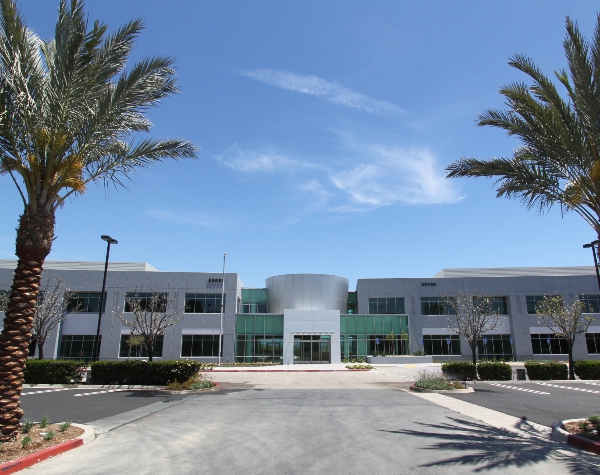 The Element office campus in Aliso Viejo, a 160,000-square-foot project that will soon hold the corporate headquarters for medical device maker Glaukos Corp. (NYSE: GKOS), has sold in one of the largest area office deals of the year.

The deal works out to a price of nearly $460 per square foot for the property, the one-time home of technology firm QLogic.

It’s one of just four office properties in Orange County larger than 150,000 square feet to have traded at that high a per-square-foot price in the past five years, according to data from real estate market tracker CoStar Group Inc.

Tenant-improvement work for Glaukos at the site is currently underway, although work has slowed amid COVID-19. The $1.7 billion-valued company, now in San Clemente, is expected to move its headquarters to the Aliso Viejo facility next year.

Newport Beach-based Waterford Property Co., formerly Stillwater Investment Group LLC, sold the campus, which it bought in late 2016 for $36 million when it was being vacated by QLogic, a networking and storage provider now operating under the Marvell Technology Group umbrella in Irvine.

“We invested millions over the past few years in the campus to turn it into a state-of-the-art creative office project,” said John Drachman, who co-founded Waterford and heads its commercial division.

“The project is a strong representation for the type of office investments Waterford anticipates acquiring in this next cycle.”

Newmark Knight Frank represented Waterford and its equity partner on the deal, CrossHarbor Capital Partners, while IRA was self-represented.

“The buyer was attracted to Glaukos’ long-term stability, credit and commitment to the campus,” said NKF Executive Managing Director Paul Jones, who worked on the deal with colleagues Kevin Shannon, Ken White and Brandon White.

The Aliso Viejo deal was in the works prior to the market turmoil of late caused by coronavirus, with the final price reflecting a slight discount as a result.

“We had been thinking of selling the property for the past nine months or so, and we are grateful that we were able to get it done, even as COVID-19 hit,” Drachman said.

“There was a slight restructuring in price due to where the debt markets were, but this is a good example that commercial real estate capital markets are still functioning.”

The recent transaction continues a selling pattern for Waterford, which has been involved in $250 million of deals in the past two years.

“We’ve been selling more than we’ve been buying, and now we are focusing on the asset management side of the company as we prepare to get through this market dislocation,” Drachman said.

The buy adds another pricey office to the local portfolio of IRA, which has been targeting Orange County for its buying spree; it spent over $140 million in the past year or so on reported area deals.

A month ago it bought a 56,000-square-foot medical office just off the 55 Freeway in Santa Ana; that deal sold for $38.4 million, or about $690 per square foot, one of the higher PSF prices for an area building of its size in the past few years.

“We are in a unique position right now with a tremendous access to capital,” said IRA Principal Jay Gangwal.

He said that IRA has acquired “roughly half a billion in assets” with the undisclosed partner, including the recent Glaukos purchase.

The company is planning an additional $150 million in deals for June and July in Southern California, he said. A deal also announced last week was the nearly $40 million purchase of a 62,969-square-foot, single-tenant medical clinic in the San Gabriel Valley city of Covina. That buy counted a nearly $620 per-square-foot price.

IRA’s recent push goes against a larger industry trend that’s seen a halt on dealmaking as investors gauge coronavirus’ impact on pricing and the market.

IRA is bullish, however, especially for healthcare assets with strong, long-term tenancy.

“In recent years, we’ve focused on divesting riskier assets and redeploying capital into properties that are more resistant to downturns, such as healthcare and life sciences, and the Element buy is no different,” Gangwal said.

“San Diego is more commonly viewed as the national life science hub, but Orange County is quickly transforming into one as well,” he said, pointing to the local expansion of companies such as Edwards Lifesciences Corp. and Ambry Genetics as markers of this trend.

The other larger office deal seen in OC the past month was also healthcare-related: the $108 million buy of an office and 12 acres of land for City of Hope’s new Irvine campus at FivePoint Gateway.

The significant price per square foot is a result of upgrades put in place in recent years, as well as long-term tenant Glaukos, whose iStent products are used to treat glaucoma, a major cause of blindness.

The company signed a 13-year lease for the property in 2018. The lease began in April of last year, although the tenant has yet to move in. Regulatory filings indicate that the landlord of Element will fund up to $12.6 million in tenant improvements at the site for Glaukos.

Glaukos is expected to maintain its current operations in San Clemente, while the Aliso Viejo base will hold its new headquarters as well as research and lab facilities.

The site could ultimately hold up to 600 employees and includes room for additional development on 2.8-acres of vacant land next to the Aliso Viejo buildings. Glaukos owns that land.

“We’re excited to be a capital source and landlord when the time comes for future development at the site,” Gangwal said.