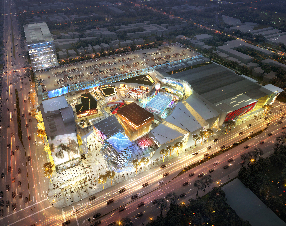 City officials and executives from Lynwood developer M+D Properties and construction company Swinerton Inc. were on hand Thursday to celebrate the topping off of The Source in Buena Park.

The mixed-use project includes roughly 400,000 square feet of retail. About half of that space is being negotiated, according to M+D Vice President of Property Management and Government Relations Katie Wanamaker.

Officials have yet to disclose specific tenants or the makeup of retailers except to say that it will be a mix of local and international tenants.

The project will also include a four-story hotel with about 150 rooms that was confirmed on Thursday to be a Hyatt Place.

The event followed news announced last week that M+D entered into a strategic partnership with South Korea record label and talent agency YG Entertainment for a 54,000-square-foot YG Land at The Source.

YG Land will include 4,000 square feet of office and studio space, along with a 40,000-square-foot, 2,000-seat concert venue. There will also be a store selling artist merchandise.

The project is seen as a major boon for the city of Buena Park, which has long looked to breathe new life into the strip of Beach Boulevard it calls the Entertainment Zone. The zone also includes Knott’s Berry Farm, Medieval Times and last year added the Bodies and Titanic exhibitions in a space previously occupied by the Movieland Wax Museum.