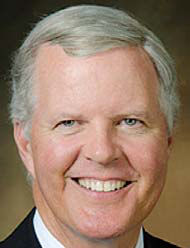 Laywers for Oakley Inc., CoreLogic Inc. and others were honored last week at the Business Journal’s second annual General Counsel Awards at the Hyatt Regency Irvine.

The event drew more than 400 lawyers, businesspeople and others, including more than 30 nominees along with winners from the inaugural 2010 event.

Honorees in the public companies category:

The honorees for private companies were:

The honorees will be profiled in the Business Journal’s July 11 issue.

Chapman University Law School Dean Tom Campbell—a former businessman, congressman and candidate for statewide office—delivered the event’s keynote address. He credited the honorees and nominees for “what they do to create opportunity” rather than “fighting over something someone else has created.”

Campbell, who recently arrived in Orange County from Northern California, said the business landscape and the legal community that serves it are “every bit as vibrant” as Silicon Valley’s.

He took several humorous turns in his talk, entertaining the crowd with tales of his days on Capitol Hill.

Knobbe Martens’ Peterson thanked the firm’s lawyers, who specialize in intellectual property, for keeping her busy and sharp.

They “clearly have IQs 50 points higher than mine because they all were technical geniuses before they became lawyers,” Peterson said.