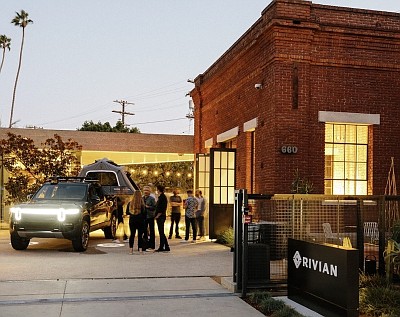 Rivian posted photos on its site of its first-ever Hub, located at 660 Venice Boulevard in Venice

Irvine-based Rivian Automotive Inc. is set to open the first of its experiential brand spaces in Venice on Sunday.

The electric vehicle automaker’s Hub on Venice Boulevard, near the neighborhood’s famed retail district on Abbot Kinney Boulevard, is aimed at going beyond the typical dealer retail model.

Although there will be Rivian vehicles on site at the company’s Hubs, Venice also includes an on-site library, community garden and will be a venue for workshops. The current schedule of events includes speakers on organic gardening, the National Parks and creating a glamping campsite.

Rivian said Venice, which is where author Ray Bradbury once lived, will be a place to “meet others interested in protecting the planet.”

Venice could offer a glimpse of what’s to come for Rivian’s Laguna Beach South Coast Cinemas site. The company bought the 15,890-square-foot property on Coast Highway earlier this year for $10.7 million. A slated opening for the OC location has not yet been disclosed.

Rivian began the rollout of its first consumer vehicle, the R1T truck in mid-September, and has filed paperwork to go public at a reported $80 billion valuation.