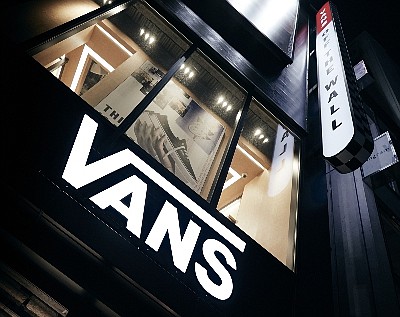 Exterior of the Vans store in Harajuku

The Costa Mesa-based footwear and apparel company saw its revenue up 102%, excluding the impact of exchange rates, according to the fiscal first quarter update released Friday from parent V.F. Corp. (NYSE: VFC) of Denver.

Vans revenue for the year is expected to grow between 9% and 10% from the prior year when it generated $3.5 billion in global sales.

The four helped drive sales in the quarter for V.F., along with growth notched in the direct-to-consumer and international businesses.

V.F. ended the quarter with revenue of $2.2 billion, up 104% from the prior year period. It had adjusted net income of $107 million, swinging up from a $221 million loss in the year-ago period.

The multi-brand apparel and footwear company now projects revenue of at least $12 billion for the current fiscal year, which would be up 30% from the prior year.