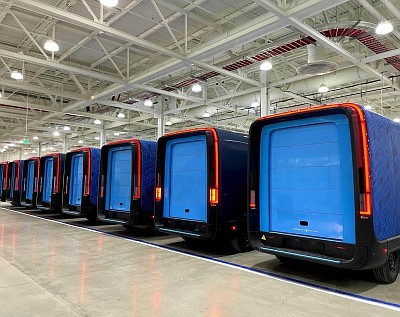 Rivian Automotive LLC founder and CEO RJ Scaringe offered a glimpse at the electric delivery vans being produced for Amazon.com Inc., setting off a new wave of speculation that the vehicles were now entering the mass production stage.

Scaringe tweeted over the holiday weekend “I love these!” along with a picture of the backside of eight vehicles. The vans bear the words “Powered By Rivian.”

The e-tailer earlier this year began rolling out the Rivian delivery vehicles in some parts of Los Angeles, in addition to San Francisco and more recently Tulsa, Oklahoma. Plans call for the vans to be deployed to 16 locations this year with 10,000 running by as early as next year.

Amazon about a year ago committed to buying 100,000 of the Rivian electric delivery vehicles as the company looks to reduce its carbon footprint to net zero by 2040.

Rivian, which has raised more than $5 billion to date from investors such as Ford Motor Co. and Cox Automotive, is reportedly said to be eyeing an IPO at a valuation of around $70 billion.