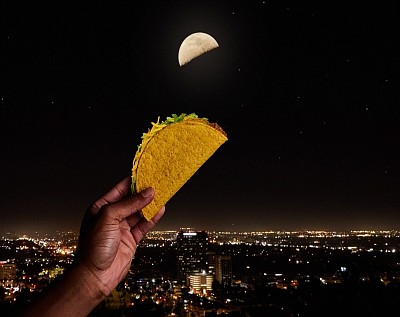 Taco Bell Corp. said it’s planning the brand’s first global marketing campaign for May 4 as the chain looks to expand its restaurant count over the next decade.

The Irvine-based company, with more than 7,000 restaurants in the U.S. alone, said customers domestically will receive a free taco on May 4 when the moon will enter a lunar phase Taco Bell’s calling Taco Moon given its resemblance to the top-selling menu item.

The company said more than 20 markets will participate in the promotion, which will vary by country.

Ad agency Deutsch LA was tapped to work on the campaign’s creative.

Taco Bell is part of Louisville, Ky.-based Yum Brands Inc. (NYSE: YUM) and has plans to eventually grow to a chain of 10,000 restaurants globally with some $20 billion in sales.