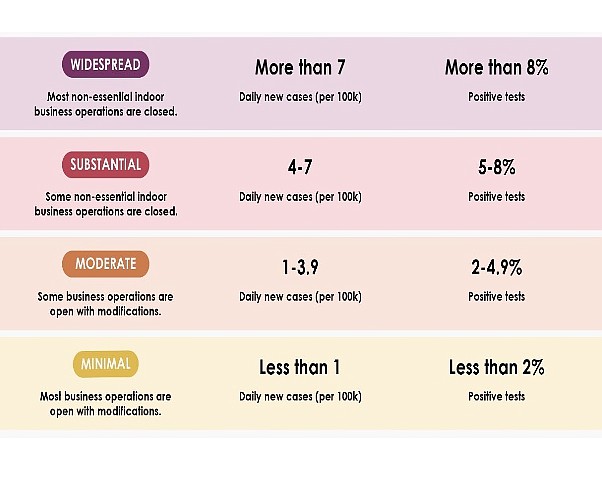 While Orange County’s current adjusted case rate—or average daily COVID-19 cases per 100,000 residents—kept it from leaving the “red” tier this week, other California counties like Los Angeles have yet to move out of the most restrictive “purple” tier.

Los Angeles currently has a case rate of 7, placing it in the “widespread” tier.

San Bernardino remains in the purple tier as well, after its case rate rose from 6.7 to 7.7 this week.

To enter into the red, or “substantial” tier—which Orange County has been in since Sept. 8—a county must report a case rate between four and seven, and a positive testing rate between 5% and 8%.

The latter metric appears to be easier to meet. When counties were reassessed on Tuesday, OC met the Orange tier metrics for positive testing rate, with 3.1% of residents tested testing positive on average. It failed to meet the case rate requirements of one to 3.9, posting a rate of 4.4, up from 3.6 the week prior.

Like Orange County, San Diego and Riverside are in the red tier, but both have a higher case rate of 6.7.