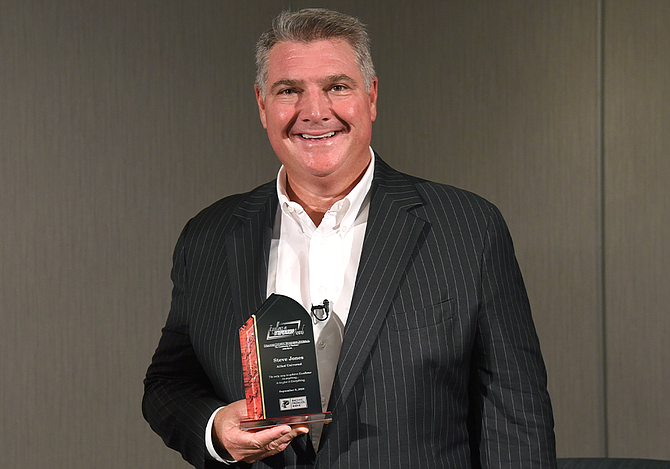 When Steve Jones began his career in 1996 at a Santa Ana security firm, he didn’t know then that he would build the biggest private security force in North America, now known as Allied Universal.

“If you would have told me I’d be here 24 years ago, I’d said probably not [believe it],” Jones said. “I was just an ex-football player and took the philosophies that I had in sports and translated them into work.”

Jones, who played football while earning a political science degree at Cal Poly San Luis Obispo, tackled a company with $12 million in annual sales and built it into a juggernaut with $8.5 billion in revenue and a workforce approaching 240,000 employees.

For those reasons, Jones was one of five winners of the 2020 Business Journal’s Excellence in Entrepreneurship award, which was revealed in a virtual ceremony Sept. 9 (see stories on the other winners, pages 4, 6, and 11).

During an interview with the Business Journal, Jones said how his company’s employees have been busy dealing with not only corona-virus, but also social unrest and hurricanes in the southeastern U.S.

“It’s been an incredibly busy summer,” he said. “The security industry is in the forefront of COVID-19 challenges and now the social and civil unrest challenges.

“Our employees are on the front lines and haven’t had a break.”

Allied Universal employs thousands who work as guards at the nation’s most affected hospitals, including in New York City and New Orleans. Some of his employees have caught the coronavirus as well. His legal department is seeing so many changes in state laws that it daily sends out an email to employees and customers.

“It’s the ever-changing policies and procedures around what is allowed and not allowed,” he said. “There’s something every day.”

Jones carefully monitors statistics such as hospitalizations, which have declined to more normalized rates in recent weeks.

“We’re planning that there will be this social distancing and policies in place until there’s really a vaccine,” he said. “We’re planning for social unrest until the end of the year, regardless of who wins the election.”

The company has pitched in on charitable events, such as donating 310,000 meals around the country, including 26,000 to Irvine’s Second Harvest Food Bank.

Allied Universal has had a strategy of growing organically and through acquisitions. It was poised to make about six acquisitions in the second quarter when it put them on hold to preserve cash.

In July, it started up again, acquiring Chicago-based Phoenix Systems. On Aug. 31, it acquired New Jersey-based Service Works Inc., a security and IT infrastructure integrator. A third acquisition was pending at press time.

It’s had to perform more due diligence to see how the targeted companies performed in recent months and some of the terms are being restructured, he said.

“We’re still incredibly cautious both internally on use of cash and evaluating strategic opportunities,” he said.

His employees are busy trying to keep businesses safe in cities like Los Angeles, Chicago and New York.

“The biggest change is dealing with social and civil unrest around the country,” he said. “That is something impacted across the country in every major city.

“We’ve had office buildings around the country where we’ve had to shelter in place, lock down those buildings. We had to evacuate the upper floors because people had taken over lobbies.”

“In Chicago on Miracle Mile—we had to evacuate not only our security officers, but store employees. Those stores were attacked.”

He said there’s been a “big increase” in demand for services, such as one request for 500 officers, which was difficult to fill because “we don’t have 500 officers sitting in a closet.”

Jones has built a technology system that alerts every client where the protests are going to be.

“In some cases, thousands of people coming by your building, impacting the ingress and egress of your facility,” he said. “That creates challenges for our customers.

One place that’s been a calm spot compared to others in the social unrest storm is Orange County.

“Orange County has been very fortunate that it’s pretty isolated from this. Los Angeles has literally four or five protests a day. Seattle and Portland never stop. New York City is every day.

“One of the reasons Orange County is so great is because of the safety of our community,” Jones said. “It’s a safer environment compared to other areas.”

From MBA Thesis To Actual Practice

Steve Jones wrote his MBA thesis, while attending night school at Redlands University, on the management buyout of family-owned businesses.

Then he discovered how hard it was in practice to raise capital in the late 1990s when he tried to buy the forerunner of Allied Universal.

“I remember trying to lead a management buyout of the original founders of what was a family-owned business,” he told Steve Goldstein, vice chancellor of health affairs at the University of California-Irvine, who presented Jones with the Business Journal Excellence in Entrepreneurship award in a virtual event on Sept 9.

After he was successful raising capital, he said he then had to learn how to deploy capital.

“There were times when I thought we weren’t going to pull it off,” Jones said, recalling a bank partner that went under during the 2008 financial crisis.

“There’s been some gut check moments when I look back and said ‘Holy Cow!’”

Jones’ mastery of revenue growth could very well be a case study in business school. In fact, one of his investors, Partners Group, was so pleased with tripling its investment return that its website cited Jones’ company as a case study.

• “You’ve got to be committed.

“Those three are how I’ve lived my life,” he said. “There are going to be a lot of trying times. It’s okay to fail. You’ve got to make lemonade out of lemons.”

The Unsung Heroes Of Allied Universal

Allied Universal likes to say its 240,000 employees are often on the front lines, whether it’s the coronavirus, social unrest or just helping people in need. Here are three recent examples:

Gerald Hunter, who faced charges for illegal distribution of fentanyl, was often described as a “ghost” for his ability to evade federal drug agents. He was No. 1 on the Most Wanted list of the Drug Enforcement Administration’s St. Louis Strike Force’s West Central Region.

The Allied Universal security team provided crucial intelligence to the U.S. Marshals which led to the successful capture of the fugitive at a Los Angeles apartment building where Allied was the security service provider.

“This team represents our Be Phenomenal culture which strives for excellence and connects us closer to the communities in which we serve,” Allied CEO Steve Jones said. “The team’s dedication and commitment to safeguarding our communities, as well as the people of our nation, is extremely honorable and courageous.”

Two months ago at the Children’s Hospital of Orange County, a parent brought her unresponsive baby girl into the Visitor Parking structure.

The mom pressed the Emergency Call Box and notified the dispatcher that her child was not breathing. Allied Universal Supervisor Juan Rivera quickly responded, performing CPR until the child’s heartbeat could be felt.

An off-duty Allied Universal security guard, Phillip Blanks, saw an apartment building on fire in Phoenix and ran towards it.

“I noticed the building was on fire and my instincts kicked in immediately,” Blanks said.

He noticed a woman who wanted to drop a toddler from a third-story balcony.

“Without any hesitation, I just ran to the baby and caught him,” he said. “I don’t see myself as a hero—just doing my job.”