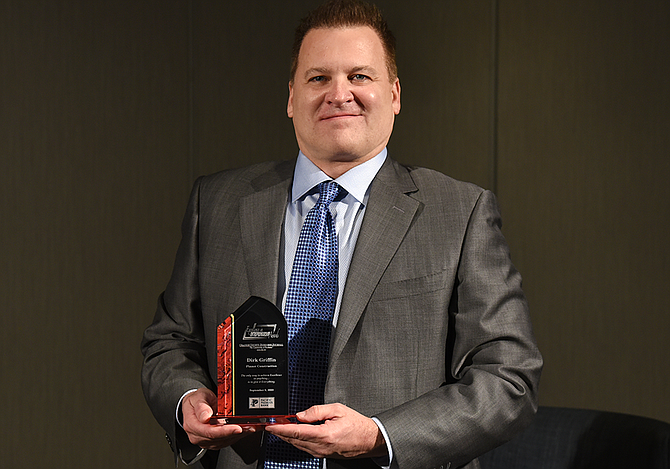 When Dirk Griffin acquired Pinner Construction at the start of 2017, he realized things would have to get worse before they could get better.

After 97 years of business, the Anaheim-based civic and education general contractor was forced to sell at the end of 2016 after it found itself facing several internal struggles, including a worsening situation with the company’s financial partners.

Griffin, then chief financial officer of the longtime family-owned and operated business, was struggling to attract any interested buyers for the firm.

“We were in a terrible construction economy, and I couldn’t get a bank or any other financial institution to loan us money under the current ownership,” Griffin said.

Those creditors, however, suggested that Griffin take the reins instead. He emerged as the unlikely buyer of the firm, and nearly four years later, the company appears to be on the other side of the struggle, with sales nearly tripling since 2016.

Griffin, also chief executive of Pinner Construction, is one of five honorees for this year’s Business Journal Excellence in Entrepreneurship awards (see stories on the other winners, pages 1, 4, and 11).

Griffin decided to take the plunge and acquire the company after a mix of personal and professional circumstances drove the former CPA to take a risk.

“I realized life is a short ride, and I wanted to challenge myself to turn the company around,” Griffin said.

He sold his house, liquidated his retirement account and borrowed money from friends and family, eventually raising north of $12 million.

The company, still in rough waters with banks, was also facing a tough legal atmosphere with several lawsuits pending.

“I don’t think I slept a full eight-hour night for two years,” Griffin said. “It was the hardest and scariest time in my life, but at the same time, I had just lost so many people close to me, which really put everything in perspective.”

To get the company back on track, Griffin’s plan was to rapidly grow. Without a source of capital, he devised a way to raise cash to expand, approaching the company’s 18 largest suppliers and working out a loan program.

“I told them the entire truth, and to my surprise, each one agreed,” Griffin said.

“The main thing was rebuilding our staff. To me, the best way to build your business is to turn your employees into entrepreneurs themselves,” said Griffin, who developed his entrepreneurial spirit at the age of 11 when he started his own lawn-mowing business.

He incentivized staff with competitive salaries that he refers to as the “highest in the industry,” bonuses and strong benefits, while keeping his own salary relatively low.

“That really motivated the staff, and made them part of the process, with many employees bringing in new clients and jobs,” Griffin said.

The results are in the numbers.

In 2017, the first year of business under Griffin’s ownership, the company had $90 million in sales. That figure more than doubled to $200 million in 2019.

Even with coronavirus complications, Pinner is on track to book more than $200 million in sales this year, and the potential to hit $300 million next year.

On top of that, the average project size for the company has increased by 300% in the past three years, and future contracts are up 500%.

“The largest project we ever did before I acquired the company was around $60 million. Now, we are handling projects three times that size, and pursuing ones that are five to six times larger,” Griffin said.

Recent wins include $140 million-plus projects in the Los Angeles Unified School District; it is also working on school projects in Anaheim, Orange and Long Beach, according to the company’s website.

The company, which turned 100 last year, now says it has resolved all of its debt issues and is on much friendlier terms with suppliers and financial institutions.

“I’ve become a man of my word, and can now do deals based on a handshake alone,” Griffin said.